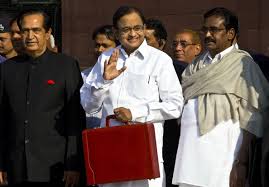 NEW DELHI : Finance Minister P. Chidambaram will be walking a tightrope when he presents an interim budget for the coming fiscal year on Monday, doling out more funds to woo voters and tax cuts to support industry while projecting a lower fiscal deficit before elections.
Asia’s third-largest economy is facing its worst economic slowdown in nearly a decade, with shrinking manufacturing, slower jobs growth and high inflation limiting the government’s ability to offer sops to voters or companies to boost growth.
Opinion polls predict defeat for the Congress-led ruling alliance in elections due by May amid widespread discontent with its mismanagement of the economy, high inflation and corruption scandals.Officials say Chidambaram is likely to make a last-ditch attempt to win back voters by announcing more funds for health, rural jobs, roads and food subsidies, and to speak about the government’s achievements in the last 10 years.
Chidambaram will have slightly more manoeuvring room after an auction of telecommunications spectrum which ended on Thursday brought in a much higher-than-expected $9.85 billion in bids. The government will get at least $3 billion of that upfront in the current fiscal year, with the rest spread out until 2026.
In an election year, India presents an interim budget to parliament for approval for planned expenditure for three to four months, but leaves the next government to take major policy steps in the full-year budget after the polls.
Chidambaram is expected to cut factory-gate duties on products like autos to support the manufacturing sector, extend an interest subsidy on bank loans to exporters, farmers, and offer tax concessions for poorer regions.Economy losing steam
Industrial output has fallen 0.1 percent in the first nine months of 2013/14 fiscal year, and annual car sales declined by about 5 percent.Since taking charge last August, Chidambaram has taken many steps such as reducing spending and gold imports to rein in the fiscal and current account deficit that helped stave off the threat of credit rating downgrades last year.
But he has made limited headway in taming persistently high inflation and shoring up economic growth.The economy is projected to grow by 4.9 percent for the current fiscal year ending in March, much lower than the more than 9 percent growth seen before the 2008 global financial crisis. Annual retail inflation remains uncomfortably near 9 percent.
Chidambaram is likely to project near 6 percent GDP growth and a fiscal deficit target of 4.2 percent of gross domestic product for coming 2014/15 fiscal year.He is expected to report a fiscal deficit of nearly 4.8 percent of GDP for the current fiscal year, helped by sharp spending cuts, higher receipts from the sale of telecoms spectrum and dividends from state firms.
“We will surprise everyone on the fiscal deficit numbers,” a senior finance ministry official told Reuters.“The government is expected to cut budgeted expenditure by 550-650 billion rupees in sectors like roads, metro rail, defence and power sectors to meet the deficit target,” said another government source.
It also may defer oil, fertiliser and other subsidies worth nearly 1 trillion rupees to the next fiscal year, he said, adding the final figures could be higher, and would be known only at the end of fiscal year on March 31.
Both sources declined to be identified because they were not authorised to speak about budget numbers.
However, the oil, fertiliser and food subsidies are likely to be budgeted at about 2 percent of GDP for next fiscal year, compared with 2.21 trillion rupees budgeted subsidies for this fiscal, the second source said.
The next government may revise these numbers when it presents the full-year budget in June or July.
Officials say the finance ministry has rejected the power ministry’s proposal to grant an annual 250 billion subsidy for gas-based power plants to cushion customers as natural gas prices are set to almost double from April 1.
However, the railways, defence, health and other ministries have been assured of more funds in the budget.