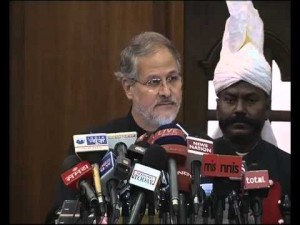 NEW DELHI : The Arvind Kejriwal government in Delhi is headed for a make-or-break showdown on Friday. Delhi Lieutenant Governor Najeeb Jung has written to the Speaker against tabling the Jan Lokpal Bill.
The L-G says that the Jan Lokpal Bill cannot be tabled as it is not approved by the Centre. Sources have told media that the government may take a vote in the Assembly on tabling the Bill. Sources say that if the Kejriwal government loses the vote, he could step down as CM on Friday itself.
There were unruly scenes in the Delhi Assembly on Thursday with the Speaker’s microphone broken. This came as the Congress and BJP MLAs demanded Delhi Law Minister Somnath Bharti’s resignation. Despite the uproar over the demand, Kejriwal is looking to finally table the Jan Lokpal Bill on Friday.
Neither the Congress nor the BJP are holding back on their opposition to the Bill. “If the Jan Lokpal Bill is brought to the assembly in accordance with the Constitution, we will support the Bill. If the bill is introduced in an unconstitutional way, we will not support it,” said BJP leader Harsh Vardhan.
Senior MLA in the Delhi Assembly Shoaib Iqbal too has also said that he thinks that Kejriwal will most likely quit on Friday. Shoaib Iqbal said that the Congress and the BJP have joined hands to defeat the AAP government.
He said, “The Jan Lokpal Bill doesn’t matter today. They have snatched the Speaker’s power. The Congress and the BJP both will oppose it. I think Arvind Kejriwal will resign today. The AAP doesn’t know how to work on the floor, and what else they can do when their Speaker’s power is snatched?”
Iqbal, who won on the JDU ticket in the last Assembly polls, is backing the AAP government from outside. He attacked the government saying that the AAP and Arvind Kejriwal are not being able to fulfil the promises. He even termed the Jan Lokpal Bill as unconstitutional.
He said, “I have been supporting the Bill, but seeing the condition I don’t know whether I would be able to support it now or not. This was the most shameful day in the history. This is a black day for Delhi.”
Meanwhile, a PIL has been filed in the Delhi High Court challenging the Home Ministry rule that makes its clearance mandatory for tabling the Jan Lokpal Bill.