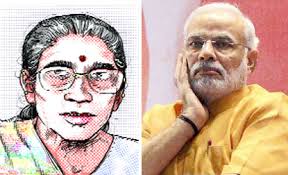 AHMEDABAD : The woman who calls herself the wife of Narendra Modi said in a rare interview this weekend that she doesn’t “feel bad” he has cut her out of his life. Mr Modi, 63, is the opposition BJP’s prime ministerial candidate. He has never commented on reports that he wed Jashodaben when she was 17.
The retired school teacher spoke to a newspaper and said that they split three years into their marriage and since he left “we have never been in touch”.”I know he will become PM (prime minister) one day,” said Jashodaben, 62.
She said she doesn’t “feel bad” Modi has never acknowledged her as his wife, adding: “I know he is doing so due to destiny and bad times.””In such situations, he has to say such things and also has to lie,” she said.
Mr Modi allegedly kept the wedding secret because it meant he would not be able to climb the ladder of the puritan Rashtriya Swayamsewak Sangh (RSS), a hardline Hindu group that frowns on key workers marrying, according to a recent Modi biography by author Nilanjan Mukhopadhyay.
In 2009, a magazine tracked Jashodaben to the school where she taught but she refused to give an interview, saying she was afraid of her “powerful” husband.Opinion surveys predict the BJP will get the most seats in the national elections.
Jashodaben gets a monthly government teacher’s pension of Rs. 14,000 and leads a reclusive life with a brother in a village in western Gujarat.In the interview, she talks about Mr Modi pressing her to study more. “I had quit studies once I went to his place and remember him saying he wanted me to pursue my education. He would mostly talk to me about completing my education.” She said the couple “parted on good terms… there were never any fights,” adding: “In three years, we may have been together for all of three months.”
She said she reads “everything (about him) I can get my hands on.”goo