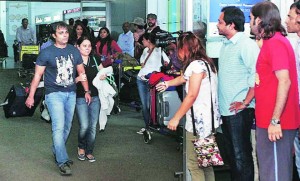 Mumbai : Away from the media glare, Sunil James broke down once inside his car. “It was only Sunil and his brother-in-law Rakesh inside the car. They barely spoke. Once inside the car, Sunil broke into tears,” said his driver Santosh Ray.
Sunil, who was detained in Togo, was released following the intervention of the Indian High Commission. He returned home after over five months. His mother Anamma was waiting to receive him at their apartment in Malad (West).
Addressing the media, Sunil said this was the first pirate attack that he has encountered in his 17-year-long career in merchant navy. This incident, he said, would not deter him from sailing. “I will return to the sea… No country’s waters can be regarded as safe. A pirate attack can happen anywhere,” he said.
Wife Aditi has always sailed with him, he added. “This was the first time that she didn’t sail with me, as she had just had Vivaan,” he said. The couple’s 11-month-old son Vivaan died of septicemia on December 2.With his return, the family will bury Vivaan’s body Sunday. The funeral will be held at Orlem Church in Malad.
Sunil recalled how helpless he felt when he received the news of his son’s death. “I felt like I have lost everything in life. It was tragic…. I felt helpless as a father,” he said.

He recounted the events of the night of July 16, when his vessel M T Ocean centurion was attacked by pirates. “We had gone to Lome to receive our cargo of premium motor spirit. After we left Lome, we were suddenly attacked. There were about 30-40 of them who just spoke French and had covered their faces so only the slits of their eyes were visible. They bound us and one of them hit my forearm and broke my nose. My arm bled for two days and I needed sixteen stitches for it. The pirates completely ransacked the ship — looting personal belongings, money and electronics. They kept us bound for a day and left. We then freed ourselves and found that we were close to the Lome Anchorage. That is when I called the Togo navy, who took us to the hospital,” he said.
The weeks that followed in Togo were tough, he said.
“Two crew members were questioned at a time during investigation.After 22 crew members were released, three of us remained, who were told the probe is not complete yet. We had a tough time communicating with them as everyone speaks French there,” he said.At the Mumbai airport, with Aditi by his side — who flew to Delhi to receive Sunil, he thanked everyone who facilitated his release.”I am thankful to the President of Togo, the judge, our Prime Minister, the Indian high commission in Ghana and the merchant navy association for their help.”Report-Indian Express.