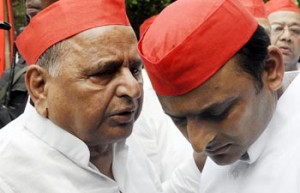 LUCKNOW: Akhilesh Yadav, the chief minister of Uttar Pradesh, has been slapped on the wrist again by his father Mulayam Singh Yadav. The Samajwadi Party leader has sharply criticized his party’s government and appears to blame the Chief Minister for keeping non-performing ministers.
“The ministers are not working. They are harmful to the SP’s future. I would have suspended them from the party if I were the chief minister,” Mulayam Singh was quoted as saying on Thursday.
He was speaking at a meeting chaired by Akhilesh Yadav, where the party decided to start its campaign for the Uttar Pradesh elections in 2017.
In November last year, Mulayam Singh had berated the state government for the “slow place” of development in Uttar Pradesh.
“There are a lot of schemes, but the pace of work is very slow. I am hearing about the launch (foundation-laying) of schemes and not about their inauguration. I am not getting a chance to inaugurate schemes,” he had said.
The Samajwadi Party came to power in 2012, after sweeping the state polls, and Akhilesh Yadav became the country’s youngest chief minister at 38.But the party has since seen its popularity wane, and in last year’s national election, it won only five of the state’s 80 Lok Sabha seats. The BJP swept the state by winning 73 seats along with allies.
Sources say in Thursday’s meeting, Mulayam Singh expressed displeasure at the poor performance of ministers and questioned why they lost their own seats in the national election.
“The party chief has directed all ministers and legislators to reach out and listen to people. There should also be introspection about why ministers lost their seats during Lok Sabha polls,” said a legislator, Ravidas Mehrotra.
From tomorrow, Samajwadi leaders will reach out to people and seek feedback on the government’s schemes. Sources say it is an attempt to counter what the party fears is the growing influence of the BJP in the state.