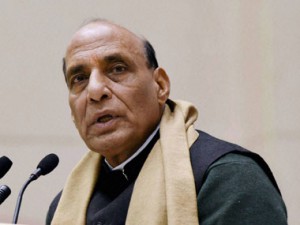 NEW DELHI : With an estimated 400 cases of acid attacks registered every month across the country, government will soon fix a time-frame for investigation and trial of such cases and ensure maximum punishment to the guilty.
Addressing a seminar on ‘Empowering Acid Survivors’, Home Minister Rajnath Singh said his Ministry is working for suitable amendments in CrPC for time-bound investigation and trial of all acid attack cases.
“I have already written to the state governments. We will ensure that those involved in such crimes get maximum punishment,” he said at the seminar which was attended many acid attack victims.
As per Criminal Law (Amendment) Act 2013, a person convicted for acid attack is sentenced to imprisonment for ten years or life.
The Home Ministry had earlier said that all such cases where maximum punishment of life imprisonment or death sentence is possible will be categorised as heinous crimes.
Singh said government has proposed to bring suitable amendments in law to fix time-frame for disposal of appeals by courts especially in cases of heinous crimes including acid attack to ensure speedy justice.
The Home Minister said the government has already taken a number of steps to regulate sale of acid, increase punishment for perpetrators of acid attack and compensation for the victims etc.Government had said to regulate the sale of acid, a web application having functionalities like registration of stockists and retailers, issue of licenses by the district administration, targeting sale of acid to individuals only after recording personal details like proof of identity and proof of address of the purchaser will be developed.
This measure will considerably reduce unauthorised sale of acid in the country, he said, adding the victims of acid attacks need to be treated by hospitals in a hassle-free manner.So far, several states — Maharashtra, Karnataka, Kerala, Haryana, Punjab, MP, Sikkim and Arunachal Pradesh — have framed rules to regulate sale of acid and corrosive substances.
However, acid is easily available in Delhi, Uttar Pradesh, Madhya Pradesh, Bihar etc.There have been reports of increasing number of acid attack cases. Though no official statistics are available about the number of such cases, an estimated 400 cases of acid attacks are registered every month across the country.
According to a report of the Law Commission, acid throwing is an extremely violent crime by which the perpetrator of the crime seeks to inflict severe physical and mental suffering on his victim. This kind of violence is often motivated by deep-seated jealousy or feelings of revenge against a woman.