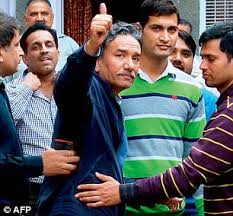 NEW DELHI : Santanu Saikia, the journalist arrested by Delhi Police in connection with the corporate espionage case, on Saturday claimed that he had nothing to do with the leak of vital documents from the Petroleum Ministry, while also stressing that it is a Rs 10,000 crore scam.
“I was doing a cover up, it is a Rs 10,000 crore scam. I was just investigating the case,” Saikia told mediapersons outside Delhi Police Crime Branch office.Saikia made the claim shortly after Union Home Minister Rajnath Singh said that no guilty person would be spared in the case and strong action would be taken against them.
Rajnath Singh said the government should be commended for unearthing the scandal.”We should be commended as we found out that this was happening, all culprits will be punished,” he told reporters.”If we would have not been vigilant, this (scandal) should not have been busted,” he added.
In more development in the case, court has ordered five accused in the classified documents leaked case to be on a three-day police custody till February 24.
Earlier this morning, Delhi Police Commissioner BS Bassi had said that the five senior executives of top private energy companies arrested in connection with the corporate espionage case would be produced before the court and added that his men would seek for police remand of the accused.
“We have arrested the five accused, the interrogation is going on. They will be produced before the court, we will request the court to give those accused police remand so that we can further interrogate them,” he told the media here.
Bassi further said the recipients of the leaked documents were also interrogated.”The documents that have been stolen were further sold and the recipients of the stolen property have been taken in control and were being questioned by us,” he said.
The executives from five energy companies – Shailesh Saxena (Manager, Corporate Affairs, RIL), Vinay Kumar (DGM, Essar), KK Naik (GM, Cairns India), Subhash Chandra (Senior Executive, Jubilant Energy) and Rishi Anand (DGM, ADAG Reliance), were arrested by the police late on Friday evening.
Saikia, who runs energy portal, and Prayas Jain, an energy consultant were arrested by Delhi Police on Friday. With this, the number of people arrested in this corporate espionage case has now reached 12.
Santanu Saikia and Prayas Jain have been sent to police custody until February 23 along with two others, who were arrested earlier. Three others are already in judicial custody for 14 days.