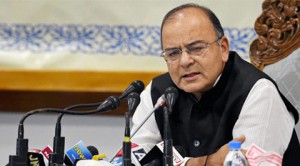 NEW DELHI : Union Finance Minister Arun Jaitley on Wednesday released the Government of India’s calendar for the year 2015 and said that it is a convergence of two of the government’s mainstream projects – ‘Swachh Bharat Abhiyan‘ and ‘Digital India’.”It is the official calendar of the Government of India, however it has wide acceptability outside the scope of the Government as well.
This year’s calendar enjoys the convergence of two of the Government’s mainstream projects. The first one is a social programme ‘Swachh Bharat Abhiyan‘ which is reflected in the visuals of the calendar,” said Jaitley.”I am positive of the fact that wherever the calendar will be displayed, it will send out a message in the favour of ‘Swachh Bharat‘. I am affirmative that this calendar is going to make important contributions in furthering the social cause,” he added.
Addressing the gathering, Jaitley further stated that for the first time the calendar will also be released in a digital format which is keeping in line which the second project of the government- ‘Digital India’.”The second programme is a developmental and an economic one- Digital India. Keeping in line with the project the calendar will also be released in a digital format. This release in a digital format changes the design of the calendar, in effect, making it freely available over the Internet through the means of technology and something that can be kept on your person 24 hours a day,” said Jaitley.
“Along with the calendar, one can also keep themselves updated about all the latest happenings in the government through the means of various applications,” he added.On Independence Day, Prime Minister Modi had said that India is no longer known as the land of black magic and snake charmers and had added that that it was time for a ‘Digital India’ and the idea will be used to revolutionise health and education in India by assuring the use of broadband for education for rural areas, and telemedicine for the poor.
This pan-India programme was proposed by the Centre on July 10 to bridge the divide between digital ‘haves’ and ‘have-nots’.Prime Minister Narendra Modi led ‘Swachh Bharat Abhiyan‘ was launched nationwide to focus on sanitation, hygiene and waste management. The aim of the movement is to make India a clean country by 2019, the 150th birth anniversary of Mahatma Gandhi.