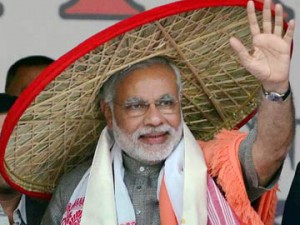 MORAN (Assam): Singling out the Sonia Gandhi family, Prime Minister Narendra Modi on Friday accused the Congress president and her son Rahul Gandhi of disrupting Parliament to avenge defeat in the 2014 Lok Sabha polls and hence blocking the passage of bills aimed at benefitting the poor.
Addressing tea garden workers in this poll-bound state of Assam, Modi alleged that “one family” was indulging in “negative politics” as he claimed that there are leaders in opposition parties other than Congress who want Parliament to function even though they oppose him.
“Those who have lost the election (in 2014) and have come down from 400 to 40 have decided not to allow Modi to work. They have decided to create obstacles and difficulties. The conspiracy for the same is going on,” he said, referring clearly to Congress.

Though the Prime Minister did not name the “family”, the reference was obviously to the Sonia Gandhi family.He listed a number of pending bills, including one for increasing the income ceiling for bonus to workers and the other related to river transport on Brahmaputra, and put the blame for their pendency squarely on Congress and particularly the Gandhi family.
“The country is not going to benefit from this politics of negativism and obstructionism. There is only one family with such a thinking, which has brought this kind of destruction. Leaders in the other Opposition parties are not like this,” the Prime Minister said.

“If anybody in politics engages in such negativism and obstructionism, it is not going benefit either them or the nation,” he added.Modi used the occasion to flag the issue of “Assamese pride” and urged people to give a chance to BJP to form a government in the state.
He contended that laws for the welfare of the state can be put in place only when there is a government in Guwahati which listens to Centre.Tea garden workers form a major chunk of voters in Assam.

When it it comes to people’s welfare, there cannot be any scope for politics, the Prime Minister said as he criticised the Congress government of Assam for attacking the Centre every now and then even after getting funds from it.
“There is a central law, which I want to implement here. But that will happen only when there is a government, which listens to the government in Delhi,” he said.Two-day shutdown during Modi’s Assam visitTwo-day shutdown during Modi’s Assam visit
He said it does not serve any purpose if some state government engages in sweet talk with Centre, gets the monetary benefits and then keeps on cursing it.Underlining that the Centre and state governments should work in tandem, Modi said, “politics should not come as a roadblock while working for people’s welfare.”

He said had the bill on National Waterways been passed by Parliament, it would have benefitted Assam as it would have provided cheapest water transport in Brahmaputra river.

“It was passed in Lok Sabha but a family, even while talking much about the welfare of Assam, did not allow the Rajya Sabha to function and hence it got stuck there.”We got a law for bonus for labourers. But those who have been defeated (in polls), reduced to around 40 seats, are determined to not let things work,” the Prime Minister said.
The Prime Minister said if Parliament is not allowed to function, the maximum loss will be to the poor.”There is negative politics.. A lot of politics is being played with our kisan (farmers). Who will protect them? Farmers were kept outside the development process but we changed all laws to benefit them for the first time,” he said.

Modi, who has often referred to his ‘tea-seller’ past, mentioned it again here to connect to tea garden labourers.”If Assam is known across the world, the reason is your hard work. Earlier generations of yours spent their lives and made India proud through their work. Even someone like me earned his daily bread by selling tea when I was young. But, in all this, has your life changed? Assam needs a government that works for the poor and the labour.

“Did successive governments fulfil their promises? You have experienced all governments. Give us a chance. I have to change this situation. Elect a government that fulfils its promises made to the poor. Give an opportunity to the BJP and we will make Assam the number one state. The pride of Assam and the well being of Assam’s youth is most important for us,” the Prime Minister said.

Striking a pun, Modi urged people of Assam to elect BJP’s Chief Ministerial nominee Sarbananda Sonowal to power to bring happiness as he noted ‘Sarbananda’ means ‘happiness for all’.

“You have given so many opportunities to others. Give a chance now to Sarbananda as well,” he said.Talking about farmers, the Prime Minister referred to the recently-launched Crop Insurance Scheme and said it was better than those of the previous governments as it ensures protection to poor farmers from natural disasters.

Modi said when he took charge as Prime Minister in May 2014, a whopping sum of Rs 27000 crore was lying idle in treasury that belonged to workers.
He said his government made changes and provided a unique number for the Provident Fund of workers so that it gets transferred to their new work place.”The Government of India does not have the right to keep that money. So I asked for those workers to be searched out or their descendants if they were dead to return their money.
“Now we have made a separate account number for the workers so that their money will go with them whereever they go,” he said.He also said the World is investing in India as they are enthusiastic about the country and and they have faith in it.