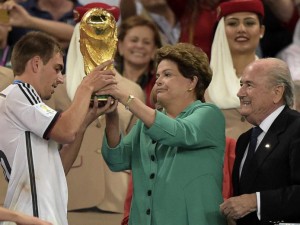 BRASILIA: Although her country failed to net a sixth triumph, Brazilian President Dilma Rousseff on Monday declared as a victory the giant nation’s staging of the World Cup.The June 12-July 13 event, won on Sunday by Germany, was “one of the world’s most beautiful cups,” Rousseff told a news conference assessing the event.
“Our country can consider itself victorious regarding the organization of this World Cup,” Rousseff said in Brasilia flanked by ministers. “I am sure that, without a doubt, it was one of the most beautiful. We had the Cup of Cups,” she added as a riposte to commentators who had predicted the Maracana stadium would only be ready “in 2038” and there would be chaos at airports trying to cope with millions of fans.
Rousseff said Brazil’s 7-1 semi-final humbling by Germany was “a problem” but quoted the Chinese proverb “defeat is the mother of all victories” and urged Brazil to bounce back.Brazil, who also failed to win the tournament the first time they hosted it in 1950, finished fourth after losing the third-place playoff to Holland 3-0.
“We lost the trophy but Brazil won the Cup which the whole world admired,” added Rousseff’s presidential chief of staff Aloizio Mercadante.Foreign fans flocked to Brazil, which had expected some 600,000 over a month of matches — around double the number who went to South Africa in 2010.In the event, more than a million came from 202 countries to taste the atmosphere, Tourism Minister Vinicius Lages revealed.
A poll of visitors at airports in the 12 host cities and at 10 land borders indicated that 95 percent of visitors planned to return one day.More than three million Brazilians crisscrossed the country during the Cup, which mobilized more than 20,000 media personnel.According to Brazil’s civil aviation ministry, 16.7 million people took flights during the event with a single day record of 572,000.
Mercadante said Brazil now looks forward to the 2016 Rio Games, which will be South America’s first Olympics.Referring back to the World Cup he said: “There were no energy grid or data transmission failures.”Look what we did in the Cup. So imagine what we can do in the Olympics!”