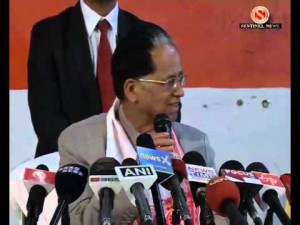 GUWAHATI: Over 75% polling was recorded for the final phase of assembly elections in Assam and the second part of the first phase in West Bengal today.
Briefing media in New Delhi this evening, Deputy Election Commissioner Sandeep Saxena said, the voter turnout in second and final phase of Assam was over 82 per cent.Polling was held in 61 constituencies covering the lower and central parts of the state.
In Assam, the voter turnout is higher than last assembly election and also 2014 Lok Sabha elections. In 2011 assembly elections, over 76 percent voting turn out was recorded in these constituencies of Assam.However one person was killed in poll related violence in Barpeta district.
Mr Saxena said, a magisterial inquiry has been ordered into the incident. The Deputy Election Commissioner also informed that an FIR has been filed against Assam Chief Minister Tarun Gogoi for violation of Representation of Peoples Act by holding press conference during poll hours.
He said despite Commission’s instructions, Mr. Gogoi went ahead with the press conference within 48 hours of closure of polls which is prohibited under election laws. He said the allegations leveled by him against BJP leader Himanta Biswa Sarma and others were found not valid.
A total of 525 candidates were in the fray in this phase. 143 EVMs had to be replaced due to technical errors as of now. Election Commission had set up 148 model polling stations in the second and final phase of Assam assembly polls. Special arrangement for elderly persons, divyang, lactating mothers have been made in model booths. Also, 73 all women polling booths have been set up.
Former Prime Minister Dr. Manmohan Singh, former Chief Minister and Asom Gana Parishad leader P K Mahanta, BJP candidate Himanta Biswa Sarma, Bodoland People’s Front President Hagrama Mahilary, AIUDF Chief Badruddin Ajmal, BJP candidate from East Guwahati Siddhartha Bhattacharya, state Agriculture minister and Congress candidate from Samaguri Rockybul Hussein have exercised their voting rights today.
In West Bengal, more than 79.51 per cent polling has been recorded in the second polling day of first phase of Assembly elections till 5 PM.Voting took place for 31 Assembly seats in the state in Paschim Medinipur, Bankura and Burdwan districts.
These areas of West Bengal had witnessed 83.72 percent polling in 2011 assembly polls. Mr Saxena said, the polling was by and large peaceful in West Bengal baring some minor incidents of political clashes. He clarified that no violence took place inside polling stations and their premises in this phase

AIR correspondent reports that stray incidents of violence, mainly involving clashes between supporters of the ruling Trinamool Congress and opposition parties, were reported from the districts that went to polls today.

At Jamuria in Burdwan district clashes broke out during the polling, first between the TMC and the BJP activists and, later in the day, between TMC and CPI-M supporters.

Several persons have been reported injured from both sides. During the TMC clash with BJP, Central forces personnel, sent to the spot, lathi-charged to disperse the warring groups. In the clash between TMC and CPI-M supporters five Left workers were seriously injured and some houses of the Left supporters reportedly torched.
A CPI-M polling agent was attacked and seriously injured allegedly by workers of the ruling party. He was prevented from attending booth duty. Two TMC activists have been arrested for the attack. BJP leaders alleged that TMC activists ransacked their party camps at Katapahari and Barabani and drove away the party agent from the nearby booth. District TMC leaders refuted the charge.
Alleging use of wide-spread terror tactics in today’s voting by the TMC across the constituencies, CPI-M leader Surjya Kanta Mishra said that the Central forces were not used to protect the opposition polling agents when they were driven away by the ruling party activists.

Complimenting the people for standing in unison against the ruling side’s terror, Mr. Mishra alleged that the Election Commission failed to act firmly. His party colleague Robin Deb led a Left delegation to the CEO’s office.
Alleging kidnapping of a polling agent by TMC in Paschim Medinipur early in the day, he asked action for his safe release by the Commission.
Claiming rampant attempts of rigging by TMC, a Congress delegation also met the CEO demanding action.

The Election Commission made elaborate security arrangements for the Phase 1-B polling including aerial vigil by two helicopters. Re-poll was also conducted in two booths of Medinipur and Ranibandh assembly seats under Paschim Medinipur and Bankura districts respectively. The polling here was affected due to malfunction of EVMs during the phase1-A on 4th April.
About 70 lakh voters were enrolled for voting today in 13 constituencies of Paschim Medinipur, 9 of Burdwan and 9 in Bankura district to decide the electoral fate of 163 candidates, including 21women.
Two-phased polling was announced for 126-member Assam Assembly, while in West Bengal, which has 294 constituencies, voting is being held in six phases. The process of polls in Kerala, Tamil Nadu and Puducherry will begin on the 22nd of this month.