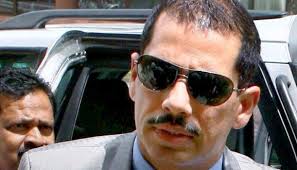 NEW DELHI: Robert Vadra, the son-in-law of Congress president Sonia Gandhi, said today that he would “never leave the country, no matter how much I am humiliated” and also shared: “I did not need Priyanka to enhance my life, I think I had enough. My parents gave me enough.”
Speaking to news agency ANI at the Delhi Golf Club, Mr Vadra also responded to a question he has been asked many times – on joining politics – with a loaded: “Never say never”.
The 46-year-old businessman has two children with Priyanka Gandhi, whom he married in 1997.”It has been 20 years as part of this family but it won’t take me 20 years to join politics,” he remarked.
Mr Vadra has campaigned in the past for Sonia Gandhi and also brother-in-law Rahul Gandhi in Uttar Pradesh but he never made speeches.
During the 2014 national election, he kept a low profile while being repeatedly jabbed by the BJP over controversial land deals in Haryana. Soon after taking power in Haryana, the BJP set up an inquiry into a clutch of land deals including that involving Mr Vadra’s company.
To a question on his idea of patriotism, Mr Vadra said: “I was born and brought up here, I would never leave my country no matter how much the pressure, no matter how much I am humiliated. No matter what the government says, I have the ability to sustain and to absorb. I have a very strong and good family, my children give me strength.”
Over the past year, Mr Vadra’s amped up media outreach – featuring Facebook posts and photos shared by his team – have fed speculation on his political ambition.
“I will join politics only if I can make a difference…I understand my responsibility, where I am and which family I am with and what they have done for generations…You never say never and let see what the future lies for me… I am sure it will be a bright future in politics or out of politics,” he declared in the interview.