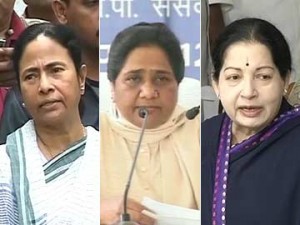 NEW DELHI : The shape of India’s next government could lie in the hands of a trio of women who command a massive following in their states and are called Amma (mother), Didi, (older sister) and Behenji (also older sister) by their supporters. Known more for their charisma than policies, Jayalalithaa Jayaram, Mamata Banerjee and Mayawati could play pivotal roles in coalition negotiations after the marathon general election that begins on Monday next.
The BJP’s Narendra Modi is the frontrunner, but his party is not expected to win an outright majority, underlining the growing support for regional parties. It is now three decades since any party won more than 50 per cent of the seats in Parliament.
In particular, analysts say, Ms Jayalalithaa, chief minister of Tamil Nadu, could play the role of kingmaker for Mr Modi after telling her supporters that it is time for a change in New Delhi.Noticeable by its absence at her rallies has been criticism of Mr Modi and the BJP, with reports suggesting that Ms Jayalalithaa has ordered her party to refrain from speaking out against the man who fancies his chance at being the next prime minister.
“This Congress government – those looters – must be overthrown!” the 66-year-old Jayalalithaa – who is usually referred to by her fans simply as Amma – told thousands of cheering supporters at a rally in the city of Pondicherry.If Ms Jayalalithaa is the queen of the south, Mamata Banerjee and her Trinamool Congress rule the roost in West Bengal and its capital Kolkata. Her decision to pull her 18 lawmakers out of the national coalition in 2012 over cuts in fuel subsidies left the Congress-led government reeling.
This time round, Trinamool’s share of West Bengal’s 42 seats is expected to be closer to 30, which will give her considerable bargaining power in coalition talks. Analysts say it is hard to guess which way Didi will jump after results on May 16.

For all her castigation of the Congress, she has also lashed out at the BJP, aware that Bengal’s many Muslim voters are wary of Mr Modi.

Ms Mayawati or “Behenji,” whose Bahujan Samaj Party (BSP) has 21 seats in the current Lok Sabha, says India will be “ruined” if Mr Modi comes to power. But she has previously cut a deal with the BJP which enabled her to be chief minister of Uttar Pradesh.

N. Sathiya Moorthy, a Chennai-based analyst at the Observer Research Foundation, said the three women have much in common. “Definitely their image, their fighting spirit, their charisma, and their administrative skills to a great extent, have left them in good stead across the board when it comes to voting,” he said.

Subhash Agrawal, a Delhi-based analyst, said Mr Modi will have to reach out to them with even the most generous projections putting the BJP several dozen seats short of a majority in the 543-seat parliament.

Ms Jayalalithaa has made no secret of her own interest in being prime minister. Although such a scenario is seen as unlikely, the former actress could still make a decisive intervention on the national stage in return for senior cabinet posts or legislation that will benefit her core. “She’s probably got the most friendly disposition towards the BJP and Modi,” Agrawal said, adding, “Jayalalithaa could be very instrumental.”