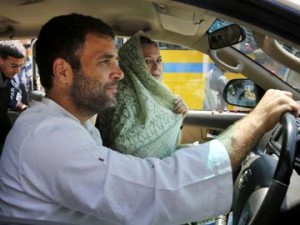 RAE BARELI :Congress president Sonia Gandhi loaned nine lakh rupees to her son and deputy Rahul Gandhi on October 13 last year. She owns no car and her ancestral property in Italy, is now worth 6.7 crore rupees.Mrs Gandhi filed nomination papers for the general elections from her constituency Raebareli in Uttar Pradesh today and the details above are from an affidavit on assets and income that she submitted.
Son Rahul chauffeured the Congress chief in a white SUV to the district collectorate and she was accompanied by old family friend Satish Sharma as she filed her papers.Rahul was also with his mother when she attended a “havan” or religious ceremony at the local Congress office, said to be a Gandhi family tradition in Raebareli, which has sent Sonia to the Lok Sabha since 2004.
The affidavit she filed today shows the Congress president’s total income in the year 2012-13 at 14.2 lakh. The 67-year-old owns jewellery worth 23 lakh, gold worth 39 lakhs and 3.2 acres of land. In 2009, Mrs Gandhi had declared that she had 75,000 rupees in cash and deposits and bonds of 50 lakhs. That year, her asset statement showed gold and silver jewellery worth almost 30 lakh.
Now she has 85 lakhs cash in hand, 66 lakhs in FDs and bonds and mutual funds of about 1 croreRaebareli was the constituency of former Prime Minister and Sonia’s mother-in-law Indira Gandhi and the Congress expects a walkover this time, too.Indira Gandhi was elected from Raebareli in the 1960s and also in 1980. Her husband Feroze Gandhi held the seat in the 1950s.Sonia Gandhi contested her first parliamentary election in 1999 from Amethi. Five years later, she shifted to Raebareli, vacating Amethi for son Rahul’s electoral debut.
The BJP had earlier this week reportedly evaluated yoga guru Baba Ramdev’s suggestion that it field senior leader Uma Bharti against Mrs Gandhi, before announcing that a Supreme Court lawyer, Ajay Aggarwal, would be the party’s candidate in Raebareli. The Samajwadi Party, which rules UP, is not fielding a candidate against Mrs Gandhi.