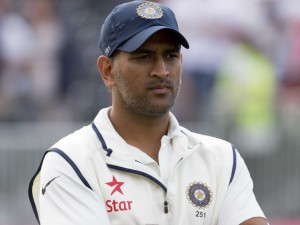 NEW DELHI : India skipper MS Dhoni defended his batsmen after another poor show at Old Trafford, where the tourists lost the fourth Test to England by an innings and 54 runs inside three days.
“I think even in the first innings we weren’t up to the mark in the batting department. I feel so far in the series our batting had not really clicked. We need to get better.  It’s a difficult one to know what’s gone wrong. A few of them are going through a lean patch. Outside India, this group has gone well until here. The wickets have been good for batting but we haven’t applied ourselves. All the batsmen need to do is apply themselves better, nothing more than that,” Dhoni said.
There was a 100 per cent forecast for rain on Sunday and India needed to bat out the final session on Saturday to stand a chance of getting away with a draw. But after Chris Woakes struck to remove Murali Vijay before tea, India lost as many as nine wickets in two hours, four of those to part-time spinner Moeen Ali, who has been their biggest nemesis in the series besides James Anderson.
Dhoni, who scored a gutsy 71 in the first innings, before attempting to stall defeat with a quick knock in the second, asserted there was not much cause for concern despite repeated failures by his batsmen. The captain admitted the batting has failed to click but insisted all they needed to do was apply themselves better. The failures of Virat Kohli (108 runs in eight innings) and Cheteshwar Pujara (207 runs in eight innings) have been the biggest detriment to India’s setback in the series, but Dhoni justified their lean patch this English summer.
“We have been consistently exposing Pujara to the new ball because our openers are not getting partnerships, but that is something a number three batsman has to go through. Pujara goes in with only three or four overs bowled; he has been under pressure and it will improve him as a cricketer. (As far as Kohli was concerned), I feel he’s middling the ball really well. He has had a beautiful two and a half years.”
India’s top-order, over the last two Tests, have made batting look rather difficult, but Bhuvneshwar Kumar and R Ashwin at Old Trafford, have shown that with a little more determination, it was possible to score runs. Dhoni suggested it was the runs scored by the bowling all-rounders in the side, that have to an extent, lessened the damage at the end.
“We have played five bowlers through the series and it is the fifth bowler’s runs with the bat that have helped camouflaged the performance of the first five or six batsmen. More than the bowling, it the batting that needs to improve,” said Dhoni.
The Indian skipper was of course, thrilled to see Varun Aaron bowl with sheer pace, as he finished with career best figures of 3/97. The 24-year-old pacer also ‘accounted’ for Stuart Broad, who was left with badly-injured nose, courtesy a nasty bouncer from the Jharkhand seamer: “Aaron can bowl fast and gives us the option to bounce batsmen out.”
In the absence of Ishant Sharma, Aaron gave India’s attack the much-needed teeth in the pace department.India will now get two extra days to sort out their woes before the final Test gets underway at the Oval from August 15.(NDTV).