New Delhi: In phone calls to Indian officials, the United States has expressed regret over the handling of the arrest of diplomat Devyani Khobragade, who was handcuffed and strip searched in New York last week. Sources said US has told India that they are looking for a positive outcome to the row over the diplomat’s arrest and that “it should not have happened and will not happen again.”

Here are the latest developments in this report- US Secretary of State John Kerry called up India’s National Security Advisor Shivshankar Menon on Wednesday and expressed regret and concern and said “we will not allow this unfortunate public issue to hurt our close and vital relationship with India.” Report-NDTV. 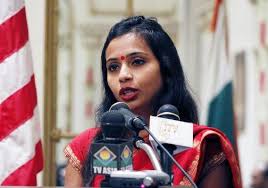 In more efforts to defuse the unprecedented diplomatic crisis between the two countries, Wendy Sherman, US Under Secretary for Political Affairs also spoke to India’s Foreign Secretary Sujatha Singh. Government sources have described both conversations as positive and conciliatory.A contrary note, however, has been struck by US attorney in New York Preet Bharara, who in an unusual and lengthy statement said, “Ms Khobragade was accorded courtesies well beyond what other defendants, most of whom are American citizens, are accorded.  She was not, as has been incorrectly reported, arrested in front of her children.  The agents arrested her in the most discreet way possible, and unlike most defendants, she was not then handcuffed or restrained.” (Read full statement)India has informed the United Nations that Devyani Khobragade is now a member of the Permanent Mission of India to the UN, which will entitle Ms Khobragade to full immunity. The US has argued that as the Deputy Consul General at the Indian consulate in New York, the diplomat had only limited immunity.
The US State Department has to issue a new identity card that would give her this immunity. Earlier this week, after details of Ms Khobragade’s arrest became public, India pared down the privileges of American diplomats and removed security barricades from outside the US embassy in Delhi.The US has accused Ms Khobragade of lying on the visa application for an Indian national who worked at her home, paying her less than minimum wages and forcing her to work for more than 40 hours a week.