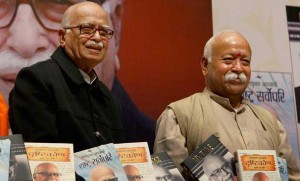 New Delhi : Narrating the story of a woman whose single act brought prosperity to all except her in the village, RSS chief Mohan Bhagwat has urged BJP veteran L K Advani to play his role in the party so that “gaon ko aag na lage (the village does not burn)”.
Releasing three compilations of Advani’s blogs on Tuesday, Bhagwat sent a clear message that the Parivar needed Advani’s experience for its own safety, and he too should not distance himself from the party.”Wahin rehna… taaki gaon ko aag na lage… jo bhi jeevan mein aapko milega, uska aapko hamesha happy meaning khojna chahiye (Stay put, so that the village does not burn. You mus:t find happiness in whatever you get in life).”

The remarks of the RSS chief come at a time when questions are being asked in the BJP if the old guard should make way for the new, and whether the new set of leaders have the experience and wisdom of their predecessors which led to the rise of the party.
To underline his point, Bhagwat turned to a story which he recalled having narrated at the release of Advani’s autobiography in March 2008. “In a village, once a housewife spat betel juice into a havan kund, only to discover that the spit had turned into a gold nugget. When her husband returned home, she narrated the episode. He told her not to let anyone else know. But word soon spread through the village, and everyone began spitting into havan kunds to find gold. All prospered except the woman and her husband.”

“A year later, when they still had no gold, the unhappy woman told her husband to leave the village. He dithered but when she threatened to kill herself, he agreed. They left the village and soon reached a hillock. When they turned around, they saw the village burning and heard people screaming.”

“The woman asked her husband if he knew what was happening to the village. He then told her that the village was safe as long as they were there. Sabko sona milta tha. Ham yeh kaam nahin karte thhe. Ham wahan thhe, isliye gaon surakshit tha,” Bhagwat said, adding that “calamities descended as soon as they left the village”. Turning to the BJP leader, he said: “Advaniji rajneeti mein hain. Kaise rahna… wahin rahna aur unhi logon mein rahna, taaki gaon ko aag na lage.”

BJP workers, who had packed the hall to listen to Bhagwat, began applauding when the full import of what the RSS chief said sank in.Bhagwat also quoted Advani, who had spoken before him, to make the point that “happiness” and “meaning” have different connotations abroad, but in India, one needs “meaningful happiness” in life: “Jo bhi jeevan me aapko milega, uska aapko hamesha happy meaning khojna chahiye (You must find happiness in whatever you get in life).”Report-Indian Express.