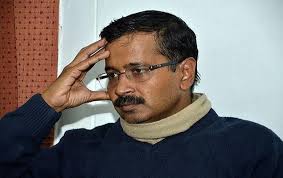 NEW DELHI : The Delhi Police have registered a first information report or FIR against the Aam Aadmi Party protesters who staged a 33-hour demonstration outside Rail Bhavan in the heart of the city. Delhi’s chief minister Arvind Kejriwal had led the demonstration. The report does not name anyone.
Arvind Kejriwal, who called off his protest last evening after an appeal from Lieutenant Governor Najeeb Jung, was taken to hospital today with severe lung congestion. He was discharged after medical tests.
The Delhi Chief Minister had spent a very cold night sleeping on the road during his demonstration. He was also seen coughing violently all through the protest.
Violence had erupted on Tuesday as the police clashed with supporters of Mr Kejriwal, some of who tried to storm through barricades and threw stones at riot police. The Chief Minister’s sit-in also created traffic jams, forced the shutdown of major metrostations, and threatened to impede arrangements needed for the Republic Day parade on Sunday.
Mr Kejriwal called off his demonstration after Mr Jung, who is the Centre’s representative in Delhi, promised to fast-track an inquiry against policemen targeted by AAP for alleged dereliction of duty. Many see it as a face-saving formula.
Not all AAPs demands were met. One of three station house officers that Mr Kejriwal wanted suspended has been “sent on leave”. In another case, a junior cop has been sent on leave instead of his senior, against whom the Chief Minister wanted action. There has been no action at all in the third case.
As he called off the strike on Tuesday evening, the Chief Minister said, “This is a victory of Delhi.” He also warned, “If any woman of Delhi is attacked, then we will not sit quietly.”
AAP’s chief spokesperson Yogendra Yadav acknowledged this morning that all their demands had not been met. But, he tweeted, “What appears to be a partial success today might prove to be a turning point in the history of Delhi’s governance.”  He also tweeted, “Some felt that we did not get our original demands. Nor did Gandhiji. He insisted on principles rather than concrete demands,” he said.
Mr Kejriwal sat on protest near the Rail Bhavan on Monday morning after he wasstopped en route to the Home Ministry, where he had planned to demonstrate against Union Home Minister Sushil Kumar ShindeMr Kejriwal wants control of the Delhi Police, which reports to the Centre, transferred to his government.