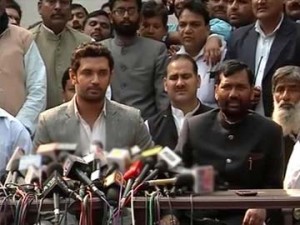 NEW DELHI : Skirting questions about a reported tie-up with the BJP for the national election, Bihar politician Ram Vilas Paswan today said he was keeping his options open and was “forced to consider the alternative” due to a deadlock with the Congress and Lalu Prasad.
“Opinion in the Lok Janshakti Party is not against going with the BJP. Our options are open. In our party’s interest we need to take tough decisions,” said Mr Paswan amid reports that he was inclined to revive his alliance with the BJP 12 years after he snapped ties with the party over the 2002 riots in Narendra Modi’s Gujarat.
Mr Paswan quit Atal Behari Vajpayee’s BJP-led regime in April 2002, criticizing Mr Modi for the handling of the communal violence that tore through Gujarat in the aftermath of the killing of Hindu train riders in Godhra.
His possible return to the BJP-led alliance would signal that political expediency can overrule the debate over the acceptability of its prime ministerial candidate, who is seen as a polarising figure in India.Mr Modi’s elevation had been the cause of the BJP’s bitter break-up with its 17-year ally Janata Dal-United last summer. “It is strange, but true,” said Janata Dal-United leader and Bihar Chief Minister Nitish Kumar today. “You have to ask Ram Vilas Paswan on this change of mind on communal forces.”
Reports of a meeting between Mr Paswan’s film actor-turned-politician son, Chirag and BJP president Rajnath Singh last week had fueled speculation about a possible realignment in Bihar.Just last month, Mr Paswan had announced that his party, along with the RJD and the Congress, will contest the next Lok Sabha elections jointly in Bihar. But Lalu Prasad’s RJD has since battled a split in the ranks and is seen as a losing bet.
The seat-sharing deal between the LJP and the BJP is still not clear. Reports suggested that Mr Paswan had asked for 12 of Bihar’s 40 seats, some of them for his relatives, but was offered only seven. He commands the fierce loyalty of at least four per cent of Bihar’s electorate.