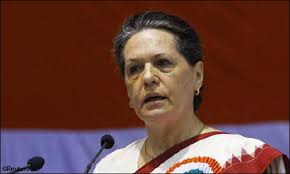 LUCKNOW: With the last session of 15th Lok Sabha over, Congress president Sonia Gandhi on Tuesday opened attack against ally Samajwadi Party during her maiden trip to Rae Bareli this year. Expressing deep dissatisfaction over the lax way in which the Uttar Pradesh government has spent Central government funds, Sonia said the government could have done much more for the welfare of poor.
Sonia’s remarks came during surprise inspections of some development works in the region. She also assessed the availability of basic infrastructure facilities in a minority populated village. Hinting that the village belonged to a community whose vote SP government depended on, Sonia’s barb came at a time when all major parties in UP, including the Congress, are trying to woo Muslim voters.
Sonia also inspected the construction site of Rae Bareli’s All India Institute of Medical Sciences. She also met with party workers, including Gulabi Gang’s Sampat Pal and her band of women at the Bhuvemau guest house in the morning. Later in the day, she met with people in the constituency and heard their grievances. Over the past year, Sonia has largely stayed away from hectic travel within her constituency, handing over the reins for nurturing Rae Bareli to daughter Priyanka instead. However, with the Lok Sabha elections approching, the Congress president made her maiden two-day trip in over six months, and made her first public attack against the state government in UP. For the Congress, UP with 80 Lok Sabha seats, is especially significant. At present, Congress has 22 MPs from the state.