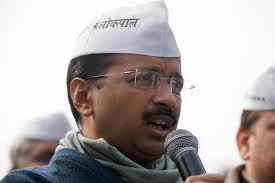 NEW DELHI : Chief Minister Arvind Kejriwal Saturday defended his 32-hour agitation in the heart of Delhi, saying the constitution did not stop a chief minister from holding an agitation
“The central government has called my protest against the constitution but there is no provision which says that a CM cannot sit on a dharna (sit-in),” he said in his speech on the eve of Republic Day at Chhatrasal stadium here.
Kejriwal said that it was for the first time that a chief minister had protested for women’s safety but by imposing prohibitory orders, the central government had proved that they were not serious about the issue.“If I have to agitate for women’s safety again, I won’t hesitate,” he said
The protest in the capital led to several violent scuffles between Aam Aadmi Party supporters and police.