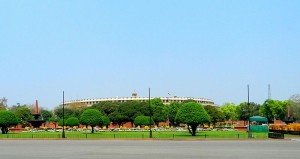 Kolkata: For top Congress general election planners in all likelihood find West Bengal 42 Lok Sabha seats staring at them, like, a plain white paper!
With Mamata Banerjee-led Trinamool Congress still holding a sway and openly said: “We’ll have no alliance with any other parties,’’ situation looks bleak for State Congress candidates and Delhi’s Congress’ bosses.
Though Congress did well in 2011 assembly elections (while with alliance with Trinamool Congress) and came back with 42 MLAs out of 65 offered to them by Mamata Banerjee, without alliance Congress now could only look forward to a politically demoralising nothing.
It’s not that Congress alone, even a top Politbureau member from State CPI(M) leadership happened to have recently requested a very former CPI leader and now a reputed journalist, “please tell us about your assessment how we would fare in 2014 general election?’
Besides lack of alliance, what ails the state Congress has been the absence of a charismatic leader in State leadership which would have rejuvenated the party workers.
Incidentally, Mamata Banerjee has meanwhile been cleaver enough to use Congress failures at the Centre to check hurtling food inflation which troubled middle-class and poor in same way.
She also widely played up, like a true politician, Congress-led UPA-II’s unfriendly refusal to bailout financially a bankrupt Bengal Government she inherited from CPI(M)-led Left Front even as an ally of UPA-II! And for Mamata the slogans were politically sold out.
Though law and order situation in the state, especially tortures on women, has deteriorated and has gone up, middle-class began to gradually dissociate with political `Change’ Mamata is supposed to have brought and her `dictatorial behaviour’ often came in for sharp criticism, but political observers believe Congress planners both in Delhi and Kolkata may not find a favourable route for a comeback tale for the party, even return of six MPs sound bleak. May be Mamata Banerjee may give President Pranab Mukherjee’s son his father’s seat to maintain a political relation going. But Congress fate looks sealed.