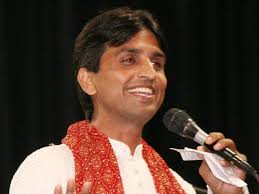 AMETHI : Aam Aadmi Party’s Kumar Vishwas held a rally today in Uttar Pradesh’s Amethi, the high-profile parliamentary constituency represented by Rahul Gandhi.Taking on the Congress vice-president at his ‘Jan Vishwas’ rally, Mr Vishwas said, “I will not go to a Dalit’s house and have dinner and then call TV crews to cover.”
“People called me a joker, questioned me contesting against Rahul Gandhi. Joker is a good person. Joker doesn’t sell the country,” the 43-year-old poet-turned-politician said as he broke into his famous song.
Though Mr Vishwas has not been officially declared the AAP candidate from Amethi, his nomination from the big ticket constituency is perhaps a foregone conclusion now for the national elections, due by May.
Calling Congress president Sonia Gandhi ‘maharani’ or queen, the AAP leader attacked her for her trips to the US last year for treatment, “Sonia ji, if you don’t trust the doctors of this country, how can I trust your son to run this country properly?”
“We didn’t want to fight elections. We were challenged. Alive or dead – we will not leave Amethi,” he said, repeating his party chief Arvind Kejriwal’s rationale behind entering electoral politics.Dismissing Kumar Vishwas’ remarks, Rajiv Shukla of the Congress said, “The way Gandhi family has served the people in Amethi, anyone may go there but they won’t be able to match up.”
Earlier, on his way to Amethi, Mr Vishwas was shown black flags by a group protesting against his purported remarks against a religious event. Stones and eggs were thrown at the two buses carrying AAP supporters.
“If you think I am going to get scared by your black flags, by violence – you’re wrong. I’m not scared,” Mr Vishwas said as his supporters burnt the flags at the rally.
Mr Vishwas blamed Congress for the violence. “‘You’ sent hooligans, waved black flags, threw eggs – I will come alone, do what you want. If violence makes the situation any better, I will come to you,” he said.
Responding to reports that the Congress Number Two was considering contesting from Chikamagalur in Karnataka, apart from Amethi, Mr Vishwas yesterday challenged Mr Gandhi to contest only from Amethi, or else Mr Gandhi would be “conceding defeat,” he said. NDTV.