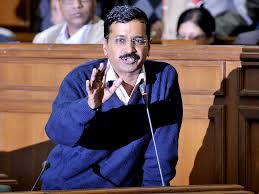 NEW DELHI : A day after Arvind Kejriwal resigned as Delhi Chief Minister after his push for the anti-corruption Jan Lokpal Bill was blocked in the state legislature, his Aam Aadmi Party alleged that law-makers from the Congress and the BJP have “joined hands to save billionaire Mukesh Ambani” and challenged the two parties to form government together in the capital.
“Both the Congress and the BJP have stabbed us in the back. They have also betrayed all those who stand for corrupt free India. This is because we raised our voice against Mukesh Ambani,” AAP leader Sanjay Singh said at a press conference.
His party colleagues added that the chaos in the Delhi assembly yesterday “exposed the BJP-Congress alliance.” “Yesterday, Congress and BJP MLAs were shouting ‘we 40 are opposed to the Jan Lokpal Bill’. It is clear that they are together. We challenge them to form government in Delhi,” they said.
As chief minister, Mr Kejriwal had initiated a criminal investigation against Mukesh Ambani, India’s richest man, and Union Oil Minister Veerappa Moily for allegedly colluding to inflate gas prices. Mr Moily says the case against him is unconstitutional. Mr Ambani’s Reliance Industries Limited has described it as “shocking” and has said it could respond with legal action.
At the press conference today, AAP leaders said that their cabinet’s resignation shouldn’t hinder the probe into six major FIRs lodged by their government, including the one against Mr Ambani. The party also announced that it would launch a nation-wide anti-corruption campaign from February 23.
Mr Kejriwal, 45, says the anti-graft bill is the heart of his party’s agenda and is essential to cleanse the polity of deep-rooted graft. “This is decisive battle against corruption. All right thinking and patriotic people should come together,” he tweeted this morning.
The legislators from the Congress and BJP who voted to prevent him from tabling the Jan Lokpal Bill yesterday say they support the proposal, but cannot ignore the fact that it has been vetoed by Delhi’s constitutional head, Lieutenant Governor Najeeb Jung. Mr Kejriwal had firmly rejected the opinion that before it is presented for review in the legislature, the bill must be vetted by the Lieutenant Governor as a representative of the Centre.