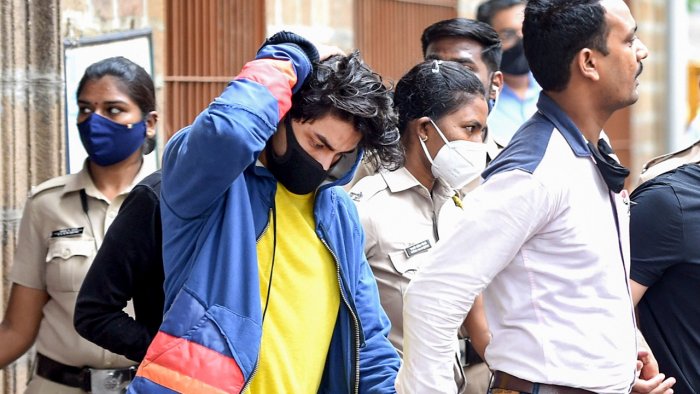 MUMBAI: Aryan Khan, son of Bollywood actor Shah Rukh Khan, has been denied bail after he was arrested in connection with the drugs-on-cruise case.
He will spend the weekend in Mumbai’s Arthur Road jail. A Mumbai magistrate’s court said Friday that Mr Khan’s bail plea was “not maintainable”, agreeing with the Narcotics Control Bureau that since drugs were seized a Sessions Court must hear the matter.
The court also rejected pleas from two other accused – Arbaaz Merchant and Munmun Dhamechat. All three must now approach the Sessions Court for relief. The young celebrity, from whom the NCB has admitted that no drugs were recovered, will now be returned to Mumbai’s Arthur Road jail.
Arguing against bail per se, the NCB said releasing Aryan Khan could harm the case. The agency claimed he could tamper with evidence and influence witnesses. It also insisted Aryan Khan and the others were “regular users of contraband”.
“They are influential persons… is a chance of tampering with evidence. Had it been one person with small quantity, it would be different. We have a lot of material… protection like bail at this stage will hamper the investigation,” Additional Solicitor General Anil Singh said.
The NCB on Thursday had sought further custody of Aryan Khan, Arbaz Seth Merchant, and Munmun Dhamecha till Monday (11 October). However, the court rejected the prayer, saying simply remanding the accused to custody without reason is cogent ground for violating liberty. The NCB took Aryan and other accused to its office as jail would not admit the new inmates post 6 PM. Today, the anti-drugs agency shifted Aryan Khan and other accused to Arthur Jail.
After a hearing marked by snippy comments, a lot of bickering and flying tempers, a Mumbai court on Friday rejected the bail application of Aryan Khan and two others in a case pertaining to an alleged seizure of narcotic drugs from a cruise ship off the Mumbai coast. “Applications rejected. Not maintainable,” said Additional Chief Metropolitan Magistrate R M Nerlikar while denying bail to the three accused. The judge dictated only the operative part of the order initially.

“Unless I complete the entire order, I won’t leave the court today,” said the judge. “Not appropriate to reserve the order at this point in time,” he said as the hearing drew well into the later half of the evening. The order means that Aryan and the other accused will have to spend the weekend in the Arthur Road Jail lock-up in a quarantine cell as the Mumbai sessions court is not working given that it is the second Saturday of the month. Even if the holiday court is moved, relief is unlikely till Monday. “We will try our best to move the court tomorrow,” Adwait Tamhankar, who is representing co-accused Arbaz Merchant, told Media.

The NCB represented by the Additional Solicitor General Anil Singh primarily argued on the question of maintainability of the bail plea. The ASG said that the bail plea was maintainable only in front of the Sessions Court. “This court does not have the jurisdiction to hear the bail applications,” he said, even as the defence vehemently opposed it.  Aryan Khan Will Have to Follow This Routine in Arthur Road Jail Over 25 kg of Heroin Worth Rs 125 Cr Seized from Container in Navi Mumbai’s Nhava Sheva Port “If I raise an issue of maintainability, then that needs to be argued first. Then the question on merit arises,” he said. “The court will decide what is to be argued first,” Satish Maneshinde, Aryan’s counsel, snapped. “For the first time, someone is telling the court how to conduct a matter,” he said later. The ASG snapped back saying he wasn’t dictating anything. “I am merely stating the position of law,” he said.

The NCB on 2 October carried out raids at an alleged rave party at a cruise off Mumbai coast. It seized 13 grams of cocaine, 5 grams of MD, 21 grams of charas and 22 pills of Ecstasy and ₹1.33 lakh.The agency detained eight persons — Aryan Khan, Arbaaz Merchant, Munmun Dhamecha, Nupur Sarika, Ismeet Singh, Mohak Jaswal, Vikrant Chhoker, Gomit Chopra.
After hours of questioning, the NCB formally arrested Aryan Khan, Arbaaz Merchant, and Munmun Dhamecha. Three persons have been booked under Section 8C, 20B, 27 (Punishment for consumption of any narcotic drug or psychotropic substance) and 35 (Presumption of culpable mental state) of the Narcotic Drugs and Psychotropic Substances Act (NDPS Act). Khan, Merchant, and Dhamecha were first sent to one-day NCB custody which was later extended to 7 October. They were on Thursday produced again before the court, which sent them to judicial custody for 14 days.
(With Inputs from Mumbai Bureau).