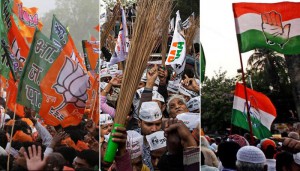 NEW DELHI: With campaigning ending for Delhi polls, political parties have gone all out to convince voters in their favour, Thursday. As suggested by various opinion polls, the fight appears to be largely between the Bharatiya Janata Party (BJP) and the Aam Aadmi Party (AAP) with the Congress relegated to the third place.
The battle for Delhi has reached a crescendo with parties conducting road shows and rallies across the city.For the BJP, the polls have turned into a matter of prestige as the party is keen to maintain its winning streak.
Speaking to reporters today, party’s CM candidate Kiran Bedi said that she was in the race to win it and promised good governance in the city if voted to power.Determined to ensure her victory, party chief Amit Shah has gone all out to ensure that nothing is left to chance.
As part of the massive push, the party has enlisted almost all union ministers and over 100 MPs for campaigning work. What is worrying the BJP the most is the fear that internal dissent over elevation of Kiran Bedi as the chief ministerial candidate may have made a section of the party’s Delhi unit work against party’s interests.
Prime Minister Narendra Modi has also been at the forefront of campaigning with promises galore to turn Delhi into a world-class city.On the other hand, the Aam Aadmi Party (AAP) appears to be quite confident of a victory – and a return to power in Delhi.
Arvind Kejriwal is relentlessly on the campaign trail – meeting people and promising corruption-free government in Delhi.
The AAP today accused the BJP of trying to “buy votes” by distributing money and free liquor.
“We have information that BJP is distributing money, liquor and non-vegetarian food to the public and they are also seizing voter identity cards of the poor,” AAP leader Ashutosh alleged.
“We also have information that they are trying to traumatise and threaten these voters that if they vote for AAP, they will have to bear the consequences later,” he told reporters.
Responding to the allegations, BJP spokesperson GVL Narsimha said, “They (AAP) have even sold their party tickets in these elections and their candidates were found collecting and storing liquor for distribution in elections.”
“They make all kinds of allegations against every party and institution including the Election Commission but they think they are not required to answer any questions.”It is the same party which is in the dock for its hawala transactions, for conversion of black money into white and they seem to be completely oblivious to these glaring omissions and commissions on their part,” he alleged.
Meanwhile, a group of former AAP volunteers under the banner of AVAM, who had levelled allegations of money laundering against the AAP, have approached the Election Commission to file a complaint against the party.
From the Congress, Rahul Gandhi conducted a road show today in Sultanpur Majra area. He was greeted by enthusiastic crowds all through the route, reports said.
Congress’ campaign chief Ajay Maken held an election campaign rally in Greater Kailash even as he worked to ensure that the party does well after the drubbing it received the last time.
“People voted for us, then they did not, but again they realized that we were right and they again voted for us, it will be repeated,” Maken said.