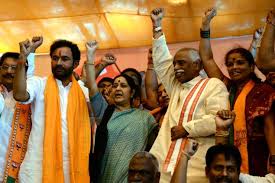 NEW DELHI : After the Union Cabinet cleared the Telangana Bill, Bharatiya Janata Party (BJP) said it will support the bill in Parliament as it has not changed its stand on the new state’s formation.
“There is no change in our stand or policies with regard to Telanagana formation. We are a national party and the stand of our national leadership on the issue is one,” said BJP’s Andhra Pradesh chief G Krishna Reddy.
The Telangana Bill will be introduced in Parliament on February 12.
The Bharatiya Janata Party leader said whenever this bill comes up in Parliament, his party will support it.He, however, said, the Bharatiya Janata Party leaders from Andhra Pradesh will seek amendments to the bill to include an economic package along with water and other packages for Seemandhra region.
Reddy said, “Since Bharatiya Janata Party does not have an MP from Andhra Pradesh in either Lok Sabha or Rajya Sabha, the state leaders today met senior leaders Rajnath Singh and Arun Jaitley and pressed for moving amendments to the bill to include special economic packages for development of both Telangana and Seemandhra regions.”
Listing such packages for the development of both the regions, he said, these include the Ichchampelly project in Telangana besides a project for uplifting the handicapped.
Reddy also called for special power projects for Telangana from the Centre and special incentives for the promotion of industry in both regions.
The controversial bill will be presented in the Rajya Sabha in the present form and the government will move 32 amendments when it is taken up for consideration.