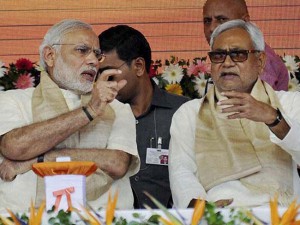 PATNA: In its attempt to wrest Bihar from Nitish Kumar, the BJP spent 135 crores on its election campaign late last year. The state election was won by Mr Kumar, who is now serving his third consecutive term as Chief Minister.
The BJP, whose efforts in the state were led by Prime Minister Narendra Modi, was the biggest spender among political parties on hiring helicopters and planes with a bill of about 38 crores. The party has disclosed this information, as required, in a filing with the Election Commission.
Mr Kumar’s Janata Dal United or JDU spent 14 crores on its campaign, with nearly 10 crores of that accounting for publicity like hoardings and advertisements. In contrast, the BJP spent about 50 crore rupees on publicity.
Lalu Yadav’s party, the Rashtriya Janata Dal or RJD, won the maximum seats in the election, trumping Mr Kumar, but in deference to a pre-election arrangement, Lalu has chosen to serve as the junior partner in their coalition government, with his son Tejaswi Yadav as Deputy Chief Minister.
Neither Lalu Yadav nor the Congress, which also teamed with Mr Kumar, have filed affidavits yet on their election expenses yet. They have been reminded that their disclosures are overdue by the Election Commission.
After a 17-year alliance with the BJP, Mr Kumar opted out of the partnership just as Mr Modi was picked to lead his party’s campaign for the national election in 2014. Bihar was among the states swept decisively by Mr Modi, and after his party’s depleted performance, Mr Kumar decided to collaborate with Lalu, a long-time enemy, for the state election, an arrangement that yielded political bounty for both leaders.