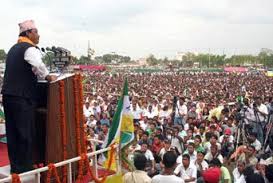 KOLKATA: With the Gorkha Janmukti Morcha (GJMM) pledging support to three BJP candidates in Hills, including Darjeeling, Trinamool Congress leader and West Bengal Chief Minister Mamata Banerjee’s claim of making inroads in Hills “didn’t ward off fear of BJP’’ again making inroads in Bengal.
While Baichung Bhutia, the TMC candidate wasn’t available for comment, but a hill-based party leader termed this backing as “beginning of second division of Bengal after 1947.
“What they did on Telengana issue, didn’t BJP supported a Congress design to divide Andhra for electoral gains?’’ He added: “But we do not bother whether GJMM backs our candidate or not, because the people in Hills want peace and development and not division we will win.’’
However, not only TMC alone, even CPI(M) did see this as Bimal Gurung’s political bargain for Gorkhaland with BJP by pledging its support to its candidates.
“TMC candidate is a novice in electoral politics, Baichung Bhutia called me up and I advised him for getting trained up little more in electoral game,’’ said Ashoke Bhattacharya who used to be the erstwhile strongman of CPI(M) in North Bengal.
State Congress chief Adhir Chowdhury also sensed foul! “We’ve not sought any support from GJMM for our candidate, it’s a failure of TMC poll strategy to understand where lay the danger in trusting divisionists, but BJP as party has no future in Bengal,’’ he told mediamen.
But whether BJP does it like it did by getting through BJP’s Jaswant Singh in 2009 “though Singh was conspicuous by his absence from all activities in Darjeeling after his election,’’ quipped a senior Hill-based TMC leader.
Political observers here see this tie-up between Rajnath Singh and Bimal Gurung as tactical failure on the part of the TMC “and its failure to build popular pressure on Gurung and his team on the issues of development and peace in Hills which would have forced in the separatists with a local tie-up.’’
Though no TMC reaction is available, but state BJP leaders fear political attacks from TMC, Congress and CPI(M) for having scripted a deal with the GJMM.