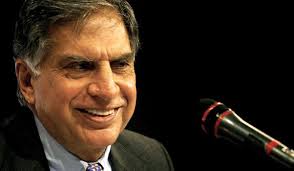 KOLKATA: West Bengal finance minister Amit Mitra today chose to retaliate against Ratan Tata who felt yesterday at a meet here that there wasn’t any sign of  reindustrialization under Trinamool Congress regime.

Mitra, who chose to react on Mamata Banerjee’s directive, told a business gathering today “We’re surprised that Ratan Tata doesn’t know that Tata company expressed their willingness to open up a big consultancy service which would promise 20 thousand jobs in our state.’’

Incidentally, Ratan Tata’s bleak paintings of Bengal’s industrial scene and future appeared a “bigger campaign against Trinamool Congress’ regime failure to attract industry under Mamata Banerjee’s rule, which stung her to quick,’’ commented an economist, adding, “and to a point Ratan Tata is also correct.’’

The new city which is gradually coming up (which Tata saw during his travel from airport) Salt Lake and Rajar Hat, is gradually coming up as an ideal town for neo-rich Bengal and IT companies, including IBM and few others, but turning into an expensive township which also developed a greater disconnect with Kolkata and Bengal in economic terms. Though Bengal neo-rich there share offices and apartments with peasants busy ploughing their lands!

“And beautiful landscapes their with also Central Government offices doesn’t promise a great change in Bengal as a whole,’’ said another economist.

“It was a good decision to shift out Nano to Gujarat,’’ by Ratan Tata was also a bullet which hurt the TMC Government the most.

To put it on a bleaker side, only recently two old and big industries have closed down their factories and offices which left about more than a thousand men jobless. “Mitra’s retaliations thus will have to go miles before they prove correct,’’ says a political commentator.