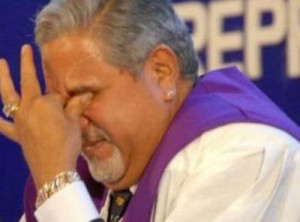 NEW DELHI: Supreme Court on Thursday directed industrialist Vijay Mallya and Kingfisher Airlines to disclose their total assets. Mallya has also been asked to indicate how much amount he can deposit in Supreme Court to prove his bonafide.
The apex court has now asked Mallya to file his reply by 21st of this month. Next hearing has been fixed on 26th of this month. Presenting their case before the apex court the consortium of banks rejected Mallya’s proposal in the current form to pay Rs 4,000 crore out of the loan.
The Kingfisher airline and Mallya had submitted a proposal last week in the Supreme Court of paying 4,000 crore rupees to the consortium of 17 banks by September. A week’s time was given by a Bench comprising Justices Kurian Joseph and Rohinton F Nariman to the consortium to respond to the proposal.
Mallya and Kingfisher Airlines owe 9,000 crore rupees to the consortium. Its leader SBI had an exposure of over 1,600 crore rupees to the now defunct airline. The banks have till now recovered only around 1,240 crore rupees of the total amount by selling pledged shares and other collaterals.

A consortium of banks led by State Bank of India today rejected the proposal in the current form offered by liquor baron Vijay Mallya and his companies to pay Rs 4,000 crore by September towards settlement of his loan before the Supreme Court, which directed him to disclose his total assets by April 21.
The consortium also asked the Supreme Court that directions be passed to ensure presence of Mallya in the country to show his bona fides that he was serious about settling his dues.

A bench comprising Justices Kurian Joseph and R F Nariman asked Mallya and his companies to file their response by April 21 indicating how much amount they can deposit in the Supreme Court to prove their bona fides.
After a brief hearing of 20 minutes, the bench posted the matter for further hearing on April 26.