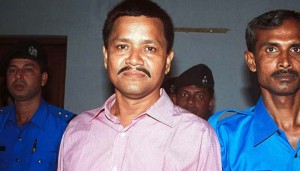 NEW DELHI: Separatist United Liberation Front of Asom (ULFA) leader Anup Chetia, lodged in Dhaka jail for the past 17 years, was extradited to India on Wednesday.
The insurgent leader, whose original name is Golap Barua, was handed over by Bangladesh to Indian officials this morning.48-year-old Chetia, the founder general secretary of the banned ULFA, along with two other associates were handed over to the Indian security agencies at Bangladesh border.
Reports said that Chetia’s extradition was only possible after Prime Minsiter Narendra Modi personally inetervened and sorted out the matter with Bangladesh.
Prime Minister Narendra Modi spoke to premier Sheikh Hasina thanking her for assistance in the fight against terrorism.India had been repeatedly demanding Chetia’s deportation for over two decades but successive governments in Bangladesh had been refusing to cooperate citing non-existence of an Extradition Treaty.

The Sheikh Hasina government finally decided to repatriate him following a written application from Chetia that he was “keen to return to India”, the sources said.
The ULFA’s founder general secretary was arrested in Bangladesh in 1997 and was under detention on completion of his seven-year jail term for cross-border intrusion, carrying fake passports and illegally keeping foreign currencies.
Chetia had also written to the UN for political asylum in Bangladesh on December 7, 2008. However, the request was declined.However, following the return of ULFA co-founder Arabinda ​Rajkhowa and negotiations of ULFA (pro-talks) faction with the Centre, Chetia “withdrew” his asylum request.
On November 30, 2009, Rajkhowa was also arrested near Dhaka and repatriated to India, but was later released on bail from the Guwahati Central Jail on January 1, 2011.
Even while being in jail, he maintained regular touch with ULFA chief Paresh Barua and other top leaders through his wife Rani Akhtar alias Monica.
Monica, along with 22-year-old son Bumoni alias Juman and daughter Bulbuli alias Bannya Akhter, who were with Chetia in Bangladesh, had returned to Assam last year of their own volition.