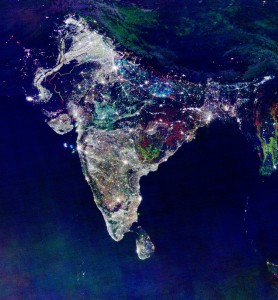 MUMBAI: Not just content to be be (arguably) the most important Hindu festival in India, Diwali is known around the world for its demonstrations of lights, colours and firecrackers. So, scrolling through Twitter and Facebook today, it’s not that surprising to be inundated by Diwali shout outs, accompanied by motivational posters or inspiring pictures. And that’s where Virender Sehwag’s Diwali tweet comes in. Just yesterday, he tweeted out this beautiful picture to his followers:
You have to admit, it would be cool to know know India is waving to NASA again, after the we saw that photo of the Indo-Pak border at night, released by the space agency last month. However, that’s not even close to true.
The image you can see up there IS India at night, but it’s not even a photograph. Saying that’s an accurate representation of India during Diwali is a lie, though I’m sure Sehwag had no idea. In fact, this is a fake claim that’s been doing the rounds since 2012.

The image is actually as old as 2003 and was created by National Oceanic and Atmospheric Administration (NOAA) scientist Chris Elvidge, to highlight population growth over time.
As NASA’s Earth Observatory says, it’s a colour-composite image created from satellite photos over time; white areas show city lights that were visible prior to 1992, while blue, green, and red shades indicate city lights that became visible in 1992, 1998, and 2003 respectively.
Trouble swallowing that? Well, to make it go down easier, the image at the top of this article was taken straight from NOAA’s website here. And below is the composite image before it was re-coloured to show population growth.
In fact, as NASA itself says, “In reality, any extra light produced during Diwali is so subtle that it is likely imperceptible when observed from space
.” That’s proven by the next image, taken by the Visible Infrared Imaging Radiometer Suite (VIIRS) on the Suomi NPP satellite on November 12, 2012. The image is based on data collected by the VIIRS “day-night band,” which detects light in a range of wavelengths from green to near-infrared, which was then artificially brightened to make the city lights easier to distinguish.

Have we blown your mind yet? Well not to fret, we’re not ruining your Diwali here, just making sure you remember that you can’t believe everything you see on the internet.