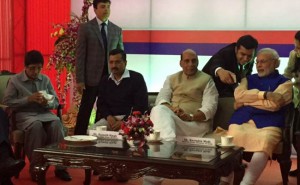 NEW DELHI: The dramatis personae of the Delhi elections came together at an at-home hosted by the city’s police commissioner on Tuesday. Chief Minister Arvind Kejriwal was the show stopper.He arrived with his wife, Sunita, and Deputy Chief Minister Manish Sisodia in an Innova car and was instantly mobbed by guests invited for the function.
Delhi’s LG Najeeb Jung, and home minister Rajnath Singh were also present. Prime Minister Narendra Modi, and President Pranab Mukherjee arrived later.Mr Kejriwal walked into the marquee a few steps behind Mr Modi and they later sat at two ends of a sofa, with Rajnath Singh between them.
Several guests jostled in an attempt to click selfies with the PM and the Delhi chief minister.On a chair next to Mr Kejriwal sat Kiran Bedi, the former police officer who was fielded by PM Modi’s BJP to counter the Aam Aadmi Party chief in the Delhi elections. This was probably the first time in months that the two met after a bitter battle for Delhi.
Both Ms Bedi and PM Modi made fierce attacks on Mr Kejriwal during the election campaign. Mr Kejriwal did not pull any punches either.But today, the AAP leader warmly greeted Ms Bedi, following which they engaged in a brief conversation. Later Ms Bedi said she had inquired about his health and asked him to take proper care.
Last week, AAP delivered a colossal blow to the BJP winning 67 of Delhi’s 70 seats. The BJP could win only three; Ms Bedi too lost her first ever election.
Within days of his victory and even before he took oath as Delhi’s chief minister, Mr Kejriwal met both the Prime Minister and Rajnath Singh to discuss full statehood for Delhi, a key AAP demand. He told them that with majority governments in both Delhi and at the Centre, it was “a golden opportunity” to grant full statehood to Delhi.
The chief reason for that demand is that the Delhi Police is controlled right now by the Centre.Mr Kejriwal had at his meetings last week also invited the Prime Minister and all his ministers for his oath ceremony on Saturday at the Ramlila grounds in the presence of thousands of Delhi’ites. No one attended, pleading prior engagements.
On Monday, Mr Kejriwal was conspicuous by his absence at the Delhi Police raising day parade.