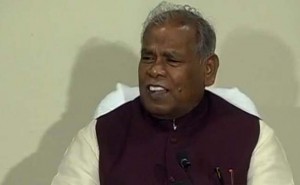 PATNA: The Janata Dal (United) suspended all seven ministers supporting Bihar Chief Minister Jitan Ram Manjhi today — three days before the government’s floor test in the assembly.
The ministers had been asked to submit resignations, but when they followed the Chief Minister’s cue and refused to resign, party chief Sharad Yadav decided to suspend them.
Only one independent minister now remains in Mr Manjhi’s cabinet – he had earlier expelled two ministers, another 20 had resigned.
The suspension, though, will not bar the ministers from voting on Friday. Four of them who belong to the legislative council cannot vote.
“They are not destroying us, they are destroying the people of Bihar… Even the BJP is not aiding them,” Mr Yadav said.The ministers had been the ones who had authorized Mr Manjhi – who refused to step down from the chief minister’s post and make way for Nitish Kumar —  to recommend the dissolution of the state assembly
Mr Manjhi has since been expelled from the JDU for anti-party activities.Mr Manjhi, who had been on a visit to Delhi, returned to Patna today. Independent minister Vinay Bihari, who received him at the airport, told reporters, “Our talks with senior BJP leaders in Delhi have been positive… We are confident of proving majority on the floor of House on February 20.”
The BJP is yet to spell out its strategy on the confidence vote. According to the party’s ideological mentor Rashtriya Swayamsevak Sangh, which has stepped in to formulate its strategy on Bihar, wishes it to avoid any direct intervention.