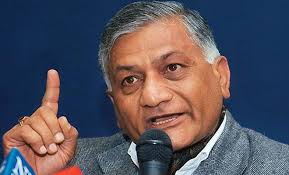 NEW DELHI : In major embarrassment for the Narendra Modi government, the Armed Forces Tribunal or AFT has said that former Army chief and now central minister General (retd) VK Singh violated rules, influenced a military court and harassed senior officers for “vengeance,” bringing disrepute to the Indian Army for personal gain.
It quashed the court martial of former 33 Corps Commander Lt Gen PK Rath and has ordered the Army to pay him Rs. 1 lakh for “undue harassment and loss of reputation.” In 2011, a court martial found Gen Rath guilty of issuing a “no-objection certificate or NoC” to a private builder to build an educational institution on a 70-acre plot adjacent to the military cantonment in Sukna in West Bengal.
He had taken this forward after then military secretary Lt Gen Avdesh Prakash noted the requirement for a good educational institute next to the 33 Corps headquarters, during an official visit. (Sukna land scam: Army Court Martial orders 2-year seniority loss for Lt General P K Rath) Gen Prakash too was court martialled months after Gen Rath was in the Sukna land case. (Court martial for Military Secretary Avadesh Prakash) On Friday, the tribunal observed that the NoC violated no rules as the land did not belong to the Army.
It also rejected the Army’s contention that the construction of the educational complex could have been a threat, saying “every activity of civilian nature adjacent to the Sukna station is a security threat cannot be accepted.” The court of inquiry in the case was initiated by Gen VK Singh when he was the Eastern Army Commander. In his petition to the tribunal, Gen Rath alleged that Gen VK Singh gave “undue importance” to the case as he had a “serious grudge” against Gen Prakash, who had made him commit to accepting 1950, and not 1951 as his date of birth. That later cut short Gen Singh’s tenure as Army Chief by eight months.
(Army chief’s age row: Govt moves Supreme Court) The tribunal noted that as a result of the date of birth issue, Gen VK Singh was overlooked for being appointed Vice Chief of Army Staff and it “resulted in a vengeance in the mind of Respondent No.2 (GEN Singh) for which he held the then Military Secretary responsible and was looking for an opportunity to get even.” The tribunal ruled that General Rath’s trial was “influenced and vitiated.”