NEW DELHI : A Delhi court today warned Arvind Kejriwal and three other AAP leaders that it would initiate “coercive process” if they fail to appear before it on May 24 in a criminal defamation complaint filed against them by Union Telecom Minister Kapil Sibal’s lawyer son Amit Sibal.Metropolitan Magistrate (MM) Sunil Kumar Sharma told advocate Rahul Mehra, who appeared for Mr Kejriwal, Manish Sisodia, Prashant Bhushan and Shazia Ilmi, that he should ensure that the accused appear before him on the next date of hearing. 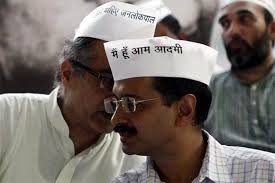 “Ensure that everybody is present on the next date (of hearing) otherwise I will initiate coercive process,” the court told Mr Mehra and fixed the matter for hearing on May 24.The court also imposed a cost of Rs. 2,500 each on Mr Sisodia, Mr Bhushan and Ms Ilmi while allowing their plea seeking exemption from personal appearance for today.It, however, allowed the exemption application of Mr Kejriwal for today and did not impose any cost on him on the grounds that he himself is contesting the Lok Sabha poll.
All the four accused did not appear before the court today on the grounds that they were busy in campaigning for the Lok Sabha election.The court, on March 15, had imposed a cost of Rs. 2,500 each on Mr Kejriwal and Mr Sisodia for their failure to appear before it.It had imposed the cost on Mr Kejriwal and Mr Sisodia while accepting their pleas seeking exemption from personal appearance for one day only.The court had also released Mr Bhushan and Ms Ilmi, who had appeared before it on March 15, on an undertaking that they would appear before it on each and every date of hearing.