GODDA (Jharkhand) : In remarks that are bound to create a big political storm, a BJP leader from Bihar suggested at a rally today that those who oppose his party’s prime ministerial candidate Narendra Modi will have to leave India and move to Pakistan after the results of the general election are announced. 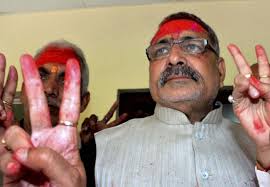 “Those who want to stop Narendra Modi (from becoming prime minister) are looking towards Pakistan. In the coming days, they will have no place in India. They will only have place in Pakistan,” Giriraj Singh said while addressing a gathering in Godda district of Jharkhand. Mr Singh made the remarks in the presence of senior party leader and former president Nitin Gadkari. He is the party’s candidate from Nawada in Bihar.
The BJP, under prime ministerial candidate Narendra Modi, is expected to win the maximum seats in the national election.Voting, spread across nine phases, ends on May 12. Results will be declared on May 16.