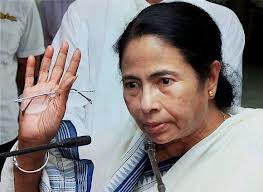 Kolkata: As angry West Bengal Chief Minister Mamata Banerjee reacts to media criticisms, she virtually decided to put a “gag’’ on the free movements of mediapersons in her new secretariat – Nabanna, by rendering State Government issued accreditation cards meaningless.
A secretariat where she shifted out recently from erstwhile colonial Writers’ Buildings – the seat of power after Independence in Bengal, she issued instructions to accredited journalists which forbid “mediamen powerless’’ to move freely around for gathering news.
Banerjee issued a Kolkata Police-inspired prescription for mediamen/women a Standard Operating Procedure which would force them to stay put in Press Corner (a special room for media) and any effort to move out of that room would require them to have police permission slips of varied colours to visit either CMO or Chief Secretary and Home Secretaries offices! And permissions may not be always available! What is more important, she dropped hints that in case instructions are violated it would be considered violation of “notorious British Government’s Official Secrecy Act of 1923!’’ Apparently, all these ridiculed Government issued media cards, it might include PIB issued cards as well!
Reacting to situation, a veteran political commentator told this reporter, “Just before coming LS election it would not only create bureaucratic complications for journalists during polls, but her move proved that Banerjee doesn’t care for old friends – media which always backed her during her struggle against CPI(M)-led Government even recently.’’
Incidentally, after she came to power, she promised journalists that old Press Corner, just opposite VIP lift, was defunct first during Emergency by Siddarth Sankar Roy and later by Joyti Basu and shoved scribes out in a small room in Writers’, “will be restored.’’
“But it proved she wouldn’t tolerate any criticism by media and she came down heavily on them,’’ said an official of Calcutta Press Club which asked Chief Minister to withdraw an apparent “gag on media.’’
Interestingly, her Government came in for serious censure from former Supreme Court Judge and Bengal Human Rights Commission chairman Ashoke Ganguly and important media groups recently.
“Though she isn’t threatened in LS polls, but it would eat up her pro-democracy image,’’ said another political commentator.
She only recently ignored a RTI seeking Bengal Government’s nod to declassify state held up secret documents on Subhas Chandra Bose!