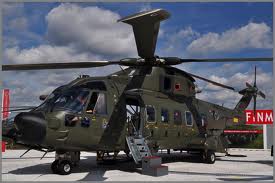 NEW DELHI : In a major twist to the AgustaWestland chopper deal scam, media has accessed travel details of middleman Christian Michel that shows he was in India just a week before the preliminary enquiry was filed by the CBI.
According to documents with media Michel was in India exactly 10 days before filing of the preliminary enquiry by CBI in February 2013. According to the documents, Michel flew in and out of India six times between January 12 and February 14, 2013. When Michel’s name was being discussed in the media in 2012, he had visited India a total of 31 times between 2011 and 2012.
He is the mystery man who has emerged as the kingpin in the AgustaWestland VVIP chopper deal scam. He is the one named by arrested middleman Guido Haschke as the man who was dealing with Indian defence and political middlemen. While CBI has managed to question Haschke in Italian court, mystery man Michael remains elusive.
media has exclusively learnt about the frequent travels of Michel to India, all the way up to February 2013. Michel flew into India 20 times in 2011 and 12 times in 2012 and three times in 2013. He had arrived in Delhi from Dubai by EK 514 on January 12, 2013 at 19:30 hrs. He went back by EK 515 on January 17 at 21:30 hrs.
Michel then again arrived in Bangalore by EK 568 on February 7 at 03:00 hrs. Later, he departed from Bangalore by EK 565 on February 9 at 1:00 hrs. Michel once again arrived in Delhi on February 12 by EK 510 at 09:00 hrs and then departed finally on February 14, 2013.
The first official complaint in the AgustaWestland VVIP chopper deal was registered on February 24 2013, exactly 10 days after Michel flew out of India. Since then, he has simply gone missing. While he travelled to India a total of 31 times between 2011 and 2012, in 2013, he kept travelling to India twice a month.
And all this took place while the government and agencies claimed to have no idea about his whereabouts.
Serious questions have now arisen in the scam. If Michel was a frequent traveller to India between 2011 and 2012, why did he suddenly fly out of India just before a PE naming him was registered? Had Michel been tipped off by someone in India about an impending enquiry? Why were Michel’s movements not being monitored in the AgustaWestland case? Is Michel the man who was dealing with politicians allegedly involved in the deal?
While the focus so far has been on former India Air Force Chief Air Chief Marshal SP Tyagi and his cousins, these new details indicate that it is Michel who actually holds all the answers.