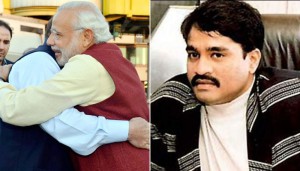 ISLAMABAD: The Pathankot terror attack had blow holes in Pakistan’s claims towards wanting to build peace with India but a new report, if true, completely exposes Islamabad’s true intentions.

A report in IBN7 claimed, Wednesday, that Pakistan Prime Minister Nawaz Sharif had hosted India’s most wanted terrorist Dawood Ibrahim just a day after Prime Minister Narendra Modi went out of the way to visit Sharif’s ancestral home on the occasion of his granddaughter Meherun Nisa’s wedding.
Prime Minister Modi had blessed the newlywed, offered presents, and left for India, unknowing of his Pakistani host’s guest list. As per the report that names Mumbai-based senior journalist Baljeet Parmar as the source, the next day (December 26) Dawood Ibrahim and his entire family attended the wedding festivities at Raiwind Palace.
The report adds that a top Indian businessman and some other people from Mumbai also attended the wedding along with Dawood.TV Channel IBN7 also claims that in the days leading to Dec 25-26, Indian intelligence agencies had intercepted phone calls of Dawood’s key aide Chhota Shakeel in which in he was heard speaking about Dawood plan to attend a big wedding in the coming days. However, the input was taken as one referring to Dawood’s wedding anniversary which falls on December 26.