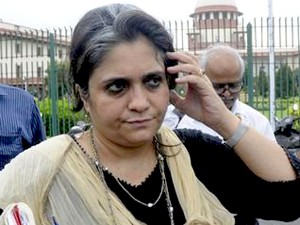 EW DELHI: Activist Teesta Setalvad, who is accused of embezzling funds meant for a museum for Gujarat riot victims, cannot be arrested till February 19, the Supreme Court today said.Ms Setalvad and her husband Javed Anand face arrest for allegedly misusing money that they raised for a “Museum of Resistance” at the Gulbarg Society in Ahmedabad, where over 60 people were killed during the 2002 riots.
They have both asked for protection from arrest, but their plea was rejected by two courts.On Thursday, as the police arrived at their Mumbai home, the couple received a last minute reprieve from the Supreme Court, which will take up their plea for anticipatory bail next Thursday, February 19.
The Gujarat police alleges that Ms Setalvad raised Rs. 9.75 crore between 2008 and 2012 through her NGO, and used Rs. 3.75 crore for personal expenses.The Gujarat government today told the top court that Teesta Setalvad and her husband used the money for branded clothes, shoes, and foreign travel.
Former additional solicitor general Indira Jaising, who was also in the court, remarked that “people wear 10 lakh suits.” The court immediately ordered, “Please maintain decorum.”Arguing for Ms Setalvad, senior lawyer and Congress leader Kapil Sibal said the amount involved was “only four lakhs and not crores.”
Mr Sibal said, “We have given documents to the high court but it didn’t look into it. There are only few people taking on the might of government like these people.” The court responded, “Don’t get into politics.”
Ms Setalvad, who has for years taken on the Gujarat government while fighting for riot victims, claims the allegations are politically motivated.A complaint was filed against her by 12 residents of the society after the museum project was reportedly shelved.
Rejecting Ms Setalvad’s anticipatory bail plea, the Gujarat High Court said she was “not cooperating” with the investigation and her custodial interrogation would be “in public interest” and “in the interest of justice”.