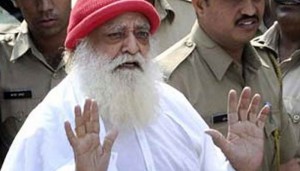 NEW DELHI/ JODHPUR: In yet another attack on the witness of the Surat rape case against controversial ‘godman’ Asaram, Rahul Sharma alias Rahul Sachan alias ‘Laptop Baba’ was on Friday attacked by unidentified man with a knife in Jodhpur court premises.According to reports, Sachan was immediately rushed to a nearby hospital. Meanwhile, police said that they have arrested the attacker.
Last month, Akhil Gupta, another witness in the said case and former driver and cook of Asaram was shot dead by unidentified persons in Uttar Pradesh’s Muzaffarnagar.He was shot dead on Jansath Road under New Mandi police station area in Muzaffarnagar on his way back home by unidentified assailants.
Gupta had given statement before a Gandhinagar Court under section 164 of CrPC along with some incriminating proof against Asaram, who is accused of sexually assaulting a 16-year-old schoolgirl.The Supreme Court, later, declined a plea for bail by self-styled godman Asaram Bapu.
Earlier, in the chargesheet filed on January 9, 2014, before Chief Judicial Magistrate, Gandhinagar, the Gujarat Police had named Asaram, his wife Lakshmi, daughter Bharti and four of his followers, Dhruvben, Nirmala, Jassi and Meera, for “hatching a conspiracy”, “illegal confinement” and “rape”.
Later, the Ahmedabad police listed 101 witnesses, of whom two, Akhil Gupta and Amrut Prajapati, are now dead. Three others related to the case have survived attacks. However, the SIT officials claim that since the murders took place after the chargesheet was filed, these would not affect the case.
The 72-year-old Asaram, who is currently lodged in Jodhpur jail, was arrested after a 16-year-old girl lodged a police complaint August 20, 2013, accusing him of sexually assaulting her at his ashram in Jodhpur.Asaram was arrested in September 2013. He is being tried under the provision of Protection of Children from Sexual Offences Act (POCSO).