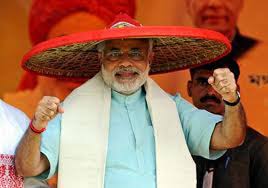 GUWAHATI : Bharatiya Janata Party’s prime ministerial candidate Narendra Modi on Saturday launched a scathing attack on the ruling UPA government, saying 2014 General Elections will mark the beginning of the end of the Congress party and India will be free from its rule.
Addressing a rally in Assam’s Silchar, Modi attacked the Congress and said that he has never seen an anti-incumbency wave as now. “This wave is going to become a tsunami and the Congress will not be seen in any corner of the country,” the BJP leader exhorted.
As the crowds cheered, Modi said that Assam is blessed with natural resources and has everything which can make it a developed state. When the BJP leader asked the crowd who looted the state, those people assembled at the venue shouted ‘Congress’.
He appealed to the people to vote for the BJP and said that there must not be any trace of Congress in Assam after the elections. Modi said, “Next to Assam is Bangladesh and next to Gujarat is Pakistan. Due to Bangladesh people in Assam are troubled and due to me Pakistan is worried.”Raising the contentious issue of illegal immigrants in Assam, the Gujarat Chief Minister stressed on sending back the immigrants to the neighbouring country.
He accused the Tarun Gogoi government in state of playing vote bank politics. The Gujarat CM further said that the BJP will end the detention camps after coming to power.
Modi stressed on giving a good life to the Hindus coming from other countries. The BJP’s PM candidate said, “Be it any nation, if a Hindu is troubled then there is only one place and that is India where the Hindus can come and we will not treat them the same way as they are treated elsewhere.”Modi stressed on giving proper health facilities, quality education and job opportunities to the children of tea garden workers.If BJP comes to power the party will develop facilities for tea-traders and tea-gardens, Modi said.
Mocking Tarun Gogoi, Modi told the huge gathering that the Assam Chief Minister suffers from sleepless nights when he learns that the Gujarat CM is coming to the state for a rally.“The CM came to Silchar few days ago and promised many things which have been not happening for years,” Modi said. He asked the people not to trust the Congress.
He also accused Gogoi of being insensitive and reminded the audience that during the 2012 Assam floods Gogoi was in the US and after that he travelled to Japan.Taking a dig at Dr Manmohan Singh, Modi said that the Prime Minister is an MP from Assam but has never done anything for the state.The BJP leader said that the infiltrators who have come to Assam for political purposes must be sent back to where they belong.The BJP’s PM candidate said that the people from the North-east are good at sports and laid emphasis on opening a sports University in the region.
No power in world can snatch away our territory: Modi in Arunachal
Raising the poll pitch in the Northeast ahead of crucial Lok Sabha elections, Bharatiya Janata Party’s prime ministerial candidate raked up the issue of Nido Taniam’s death.Addressing a rally in Arunchal Pradesh’s Pasighat, Modi said that he has come to the state with a heavy heart as a son of this land was killed in the national capital last month.The Gujarat Chief Minister said that he prays to the god to bless Nido’s family.
In an apparent attempt to attract the northeastern voters, the BJP leader said that the blood which runs in the people of this region is the same that runs in his veins.
Raking up the 1962 war, Modi said that during the war people of Arunachal didn’t come under pressure from China, and the call of ‘Jai Hind’ reverberates in this land.

He praised the Arunachal people for standing firm against China’s repeated pressure tactic. “No power in this world can snatch away our territory,” Modi asserted.Laying emphasis on his pet slogan of development, the Gujarat Chief Minister said that he was a firm believer in development and will only focus on this and not on dynasty, nepotism and casteism.
Modi stressed on bringing development to the northeastern state and said that BJP has embraced the development model and will continue to move ahead with the same agenda..Modi exhorted that Lotus (BJP’s poll symbol) will shine in all the northeastern states and there will be prosperity and progress in the region.In order to attract the young voters, Modi asked why the GenX is unhappy here and why they have to leave their homeland and go out in search for employment.
The BJP leader said that he was in Arunachal with the message of development and asked the people gathered in the rally, “Can we trust the Government in Delhi?”
He said that a government which is sensitive to the problems in every part of this state and listens to the people should be in power.The BJP’s PM candidate further stressed on improving the water resource management in the Northeast
.