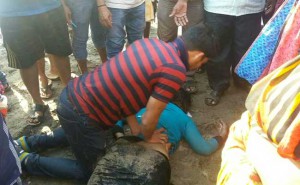 RAIGAD (Maharashtra):  At least 13 college students – part of a group of 130 on a picnic – drowned in the Arabian Sea at Murud Beach in Raigad district, around 150 km south of Mumbai, police said in Raigad on Monday. The police say 10-12 students are still missing.
The Indian Navy and the Indian Coast Guard deployed a Chetak helicopter and a speed boat besides police divers for the combined mega rescue operations.The bodies of 10 girls and three boys have been pulled out, say the police. Five students are being treated.
The cause of the massive tragedy is still not clear.
The students were part of a group of more than 130 from Maharashtra Cosmopolitan Education Society’s Abeda Inamdar College and had come to the picturesque Murud beach for a picnic, Superintendent of Police Suvez Haque said.
The college president, PA Inamdar, told that the 130 senior students, studying in first, second and third year B.Sc. (Computer Science) and BCA (Computer Applications), had gone on a college-sponsored annual picnic accompanied by at least five staff members and other support staff.
“We are shocked by this tragedy. We are making all efforts to help the students and their families with the help of the local villagers and police. A team of our trustees has already left Pune for Raigad for rendering further assistance,” Mr Inamdar said.
Thousands of tourists and locals gathered at the Murud Beach where the bodies of the victims were lined up even as grieving parents and relatives rushed to the college campus or to Murud.