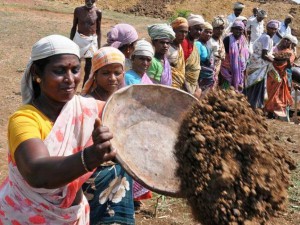 NEW DELHI: Does Gujarat government thinks itself so ‘unique’ that it can say ‘no’ to a law passed by the Parliament? the Supreme Court on Monday verbally thrashed the State government and the Centre for not implementing the National Food Security Act passed by the parliament to ensure that the poor in the nation don’t go hungry.

“Do you want to break away from the Union of India? Can a State say that it cannot implement a law passed by the Parliament? Are you saying you are not part of India? What is the Government of India doing about this?” a bench of Justices Madan B. Lokur and R.K. Agarwal asked Solicitor General Ranjit Kumar, who appeared for the Centre.
When Gujarat state counsel Hemantika Wahi responded that the implementation of the food security law is under “active consideration”, Justice Lokur replied “then it’s a pity”, while persisting to ask whether Gujarat thinks that it has a choice but not implement the parliamentary law.
“So tomorrow Bihar can say it will not implement the Criminal Procedure Code and some other States will say they do not believe in the Indian Penal Code or other laws of the Parliament. Food security law extends to the whole of India… So, Gujarat thinks it is unique,” Justice Lokur said.
“What is the Parliament doing about this? We have absolutely no idea what you all are doing?” Justice Lokur said.The Bench was hearing a PIL filed by Common Cause on the lack of effective implementation of welfare schemes like food security, MNERGA and basic water supply to drought-hit States in the country.

Mr. Kumar said a meeting of top officials of drought-hit States had meetings with the Union Agriculture Secretary on January 25 and 27 as per the order of the apex court to evaluate the situation.

Mr. Kumar said out of 36 States, 25 have been implementing the National Food Security Law. Of this, he submitted that Bihar, Gujarat and Haryana have not declared drought.
The Bench, in a written order, in reference to the Gujarat’s non-implementation of food security law, directed the Centre to respond in an affidavit by February 12 whether it is “permissible for a State to not follow the National Food Security Act”.
The court ordered the Centre to provide information in the same affidavit the parameters followed by Gujarat, Bihar and Haryana to declare themselves drought-hit.