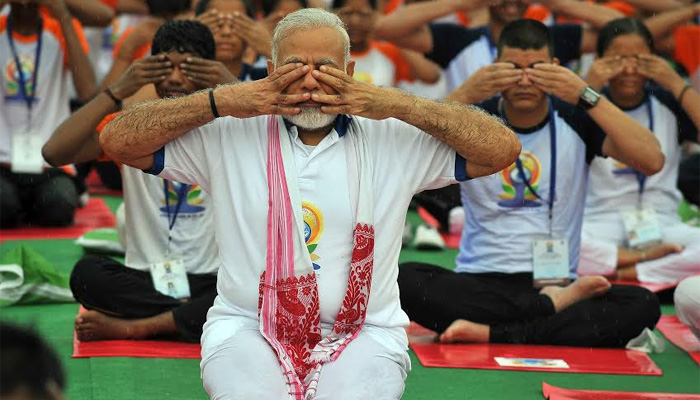 LUCKNOW/ NEW DELHI : Prime Minister Narendra Modi rolled out his yoga mat at Lucknow’s Ambedkar Sabha Sthal to lead the celebrations on the 3rd International Yoga Day.
He took part in the International Yoga Day celebrations at the Ramabai Ambedkar Maidan here. The event was also attended by Uttar Pradesh Chief Minister Yogi Adityanath and thousands of people.
Dressed in a white T-shit and loose white trousers, Prime Minister Narendra Modi greeted the people from the stage he shared with Yogi Adityanath.”I welcome all yoga lovers present here and those performing yoga in various corners of the world. Today, yoga has become a part of so many lives. Yoga’s popularity out of India is high and it has connected the world with India,” PM Modi said. 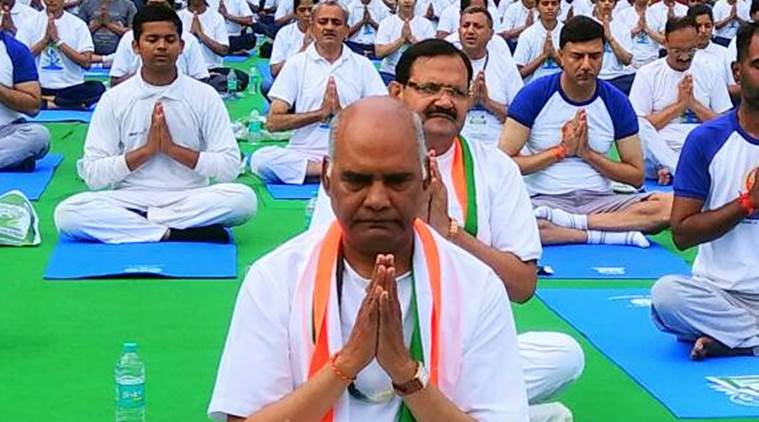 Around 45,000 people attended the event, among them UP CM  Yogi Adityanath and key ministers of his cabinet. Yoga teacher Ramdev and BJP chief Amit Shah started the celebrations in Ahmedabad.  Three years ago, PM Modi persuaded the United Nations to declare June 21 as International Yoga Day. Events are being held in 180 nations across the world today.
Addressing a huge gathering on the occasion PM Modi said that yoga was acting in a big way to bond people and the global community. The PM asserted yoga, akin to its capacity to unite the body, mind and soul, has played a “big role” in binding the world, cutting across linguistic and cultural barriers.

“Earlier, Yoga was only restricted to saints and seers in the Himalayan mountains. Now, it has become part of every person’s life,” he said in his address.He also asserted that attaining “wellness” through yoga was more important than simply being physically fit.

“It is not important to perform yoga for 24 hours. 50 or 60 minutes (is fine) because it lends harmony to the body, mind and intellect. If 1.25 billion Indians and people around the world can attain this state of well-being, then humankind can also tide over problems born out of human thoughts,” he said.
Yoga helps to unite people, U P  Chief Minister Yogi Adityanath said.”Yoga is an ancient Indian practice and all ancient scriptures including the Vedas have accepted the importance of yoga. Yoga is a way of life and helps to unite people,” Adityanath said.

Thousands could be seen clutching umbrellas or wrapped in raincoats. In Lucknow, people were seen using yoga mats as umbrellas and raincoats as yoga mat. In Ladakh, at a height of 18000 feet and a temperature of minus 25 degrees, the Indo-Tibetan Border Police jawans held a yoga session.

Yoga events are being held through the day in nearly 180 countries across the world, starting from the United Nations headquarters that has been lit up with images of yoga postures. The Permanent Mission of India to the United Nations will organise a session with renowned yoga teachers.