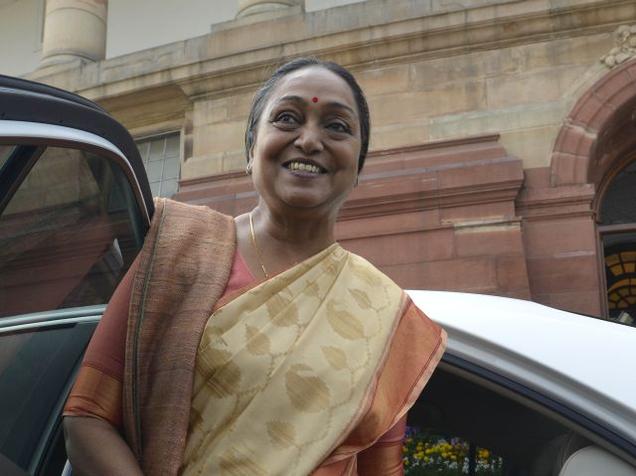 NEW DELHI : The opposition today chose former Lok Sabha speaker Meira Kumar, a Dalit, as its candidate for president against NDA’s Ram Nath Kovind. Kumar, a former diplomat and daughter of the late Dalit icon Babu Jagjivan Ram, was the unanimous choice of the 17 opposition parties that attended the meeting.

With Kovind also being a Dalit, this makes it a Dalit vs Dalit presidential contest. “We have decided to field Meira Kumar for the presidential election… We do hope that other parties also join us,” Congress president Sonia Gandhi said. Ms Kumar was a unanimous choice although NCP leader Sharad Pawar proposed three names Kumar, former union home minister Sushilkumar Shinde and Rajya Sabha MP Bhalchandra Mungekar, both Dalits from Maharashtra. while ,while CPI-M general secretary Sitaram Yechury had put forward the names of Gopalkrishna Gandhi, grandson of Mahatma Gandhi, and Prakash Ambedkar, the grandson of B R Ambedkar. However, after the NDA announced the candidature of Shri Koving, Mr Gandhi called up Mr Yechury and asked him to find another candidate.
Seventeen Opposition parties met on Thursday to deliberate on a consensus candidate and have unanimously picked Meira Kumar as their nominee. Announcing her candidature at a press conference in Delhi, Leader of the Opposition in the Rajya Sabha Ghulam Nabi Azad said: “Opposition parties have unanimously proposed the name of Meira Kumar for the upcoming Rashtrapathi Election…”
He illustrated her work in public life. Calling her a “crusader for social justice”, Azad said the Opposition couldn’t have picked a better candidate. Meira Kumar has worked in various Indian missions across the world as an IFS officer. The five-time Lok Sabha MP was the union minister and has also served as Lok Sabha speaker from 2009 to 2014.

The 72-year-old Congress leader met party president Sonia Gandhi at the latter’s residence on Wednesday, fueling speculation that she has emerged as the frontrunner for the presidential nomination.The Opposition’s plan to take on the NDA faced a setback as the Janata Dal (United) has favoured Kovind, who was the Bihar Governor.

After the meeting, Mr Lalu Yadav said: “Nitish had called me and told about his decision. I advised him not to do so but I can’t say what happened after that. Now everybody knows what hehas done. He himself had pitched for opposition unity and backtracked.” Senior RJD leader Raghuvansh Prasad Singh alleged that Nitish had taken the decision to demean the RJD. He also feared the ruling Mahagathbandhan might not last long in Bihar.

With 71 MLA and two MPs, the JD(U) has substantial vote in terms of first preference votes on which a president is elected. This is the second time when JD(U) has thrown a surprise in presidential polls by going against its allies. In 2012, it had supported Congress led UPA’s presidential candidate Pranab Mukherjee defying the then coalition partner BJP’s pick P A Sangma for the post of ceremonial head of the country.

This time, JD(U)’s decision to go with BJP-led NDA’s pick for president has come as a setback to the Congress and Left parties which are keen to put up a strong fight in the presidential contest due to ideological differences with the BJP.