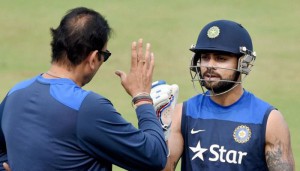 NEW DELHI : Indian opener Shikhar Dhawan and vice-captain Virat Kohli had a fallout on the fourth day of the Brisbane Test against Australia, which the tourists eventually lost by four wickets to trail 2-0 in the four-match series, according to a reputed English daily.
According to the report, both the top order batsmen confronted each other in the dressing room as India suffered a second innings batting collapse at The Gabba.
The drama inside the dressing room was triggered by overnight unbeaten batsman Dhawan injuring his elbow during a practice session but revealing the extent of discomfort just before the day’s play was about to start. The Indians had to send Virat Kohli ahead of him but the batsman was informed of the change less than seven minutes before the visitors took the field.
Kohli, reportedly, was angry with the fact that he had to start the batting proceedings for the day ahead of the southpaw, and lashed out at Dhawan after getting out without scoring a run.
On his return to the pavilion, Kohli is said to have slammed Dhawan for his cheap dismissal. But the atmosphere of the dressing room got heated up when Dhawan too snapped back by saying that he takes pride in playing for the country and no way would he fake an injury. Reportedly, Dhawan also said he would rather sit out if he is not performing, than doing so.
Ravi Shastri, team director of Indian cricket team, intervened to calm things down, which soon got a panic wave as the team lost three quick wickets within a span of 11 balls. However, Dhawan came out to bat after the fall of the seventh wicket and went on to score 81 runs, for a losing cause.
The third Test of the series is scheduled to start from December 26 at MCG.