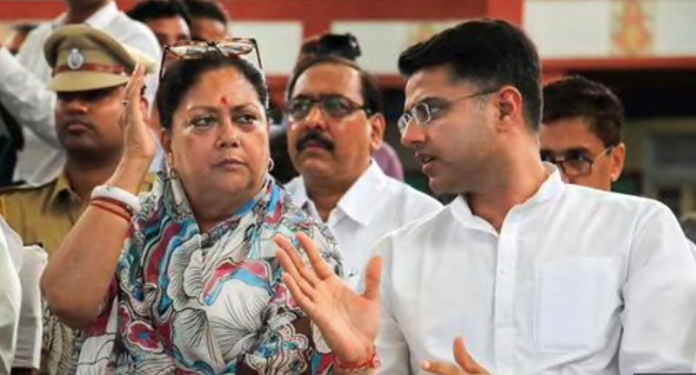 Though the party seems to have the numbers for now to hang on to power in Rajasthan, the development deepens the crisis in the Congress which has lost two major states – Karnataka and Madhya Pradesh – over the past year.
BJP vice president Om Prakash Mathur said the political crisis in Rajasthan has been caused by “weakness” within the Congress.
Vasundhara Raje — the tallest leader of the BJP in Rajasthan — is expected to make a late entry into the four-day-old political battleground tomorrow.
The BJP, which has been keeping a close watch on the disarray in the Congress camp following Sachin Pilot’s rebellion, will decide on its way forward at this meeting, sources said.
Ms Raje, despite her scuffles with the Central leadership, has been the party’s best known face in the state. A mass leader, she was handpicked by Prime Minister Narendra Modi for the Chief Minister’s post in 2014.
Ahead of the 2018 elections, she had even carried out her point despite Amit Shah’s disapproval regarding the choice of candidates.The party did not perform well in the election. But Ms Raje who still has the support of 45 of the BJP’s 75 MLAs in the state — is still the key player, making it tricky to fit in Sachin Pilot, who made it clear that he is only interested in the top post.
According to sources  several rounds of meetings have taken place between Mr Pilot and senior members of the BJP but the final decision cannot be taken without consulting Ms Raje.

The central leaders of the party dispatched senior leader Om Mathur to Jaipur this morning to take stock of the situation. He is also expected to attend tomorrow’s meeting. With Congress numbers shrinking, there has been talk of a trust vote already.
“The only way to do this is to prove your majority on the floor of the house. We demand that Ashok Gehlot immediately prove his strength in the assembly. It is very clear that his government is in minority. The onus is on him to prove this,” a source in the BJP told.
(Bureau Report with Agency Inputs).

WASHINGTON: “I can’t breathe” is the new American anthem as violent protests engulf the United States in the wake of...